Today we’re excited to bring you a cover reveal for Coy Hall’s upcoming debut novel, Grimoire of the Four Imposters, which will be hitting shelves this September 7th from Nosetouch Press! This folk horror-influenced novel follows several main characters as they each encounter a stranger who challenges their views of the world and introduces them to unimaginable horrors and dark truths. We at Ink Heist are HUGE fans of folk horror, so Hall’s debut is an anticipated read for us going into the Halloween season. A huge thank you to Nosetouch Press for letting us share this stunning cover! Below you can check out the cover and learn more about Grimoire of the Four Imposters. 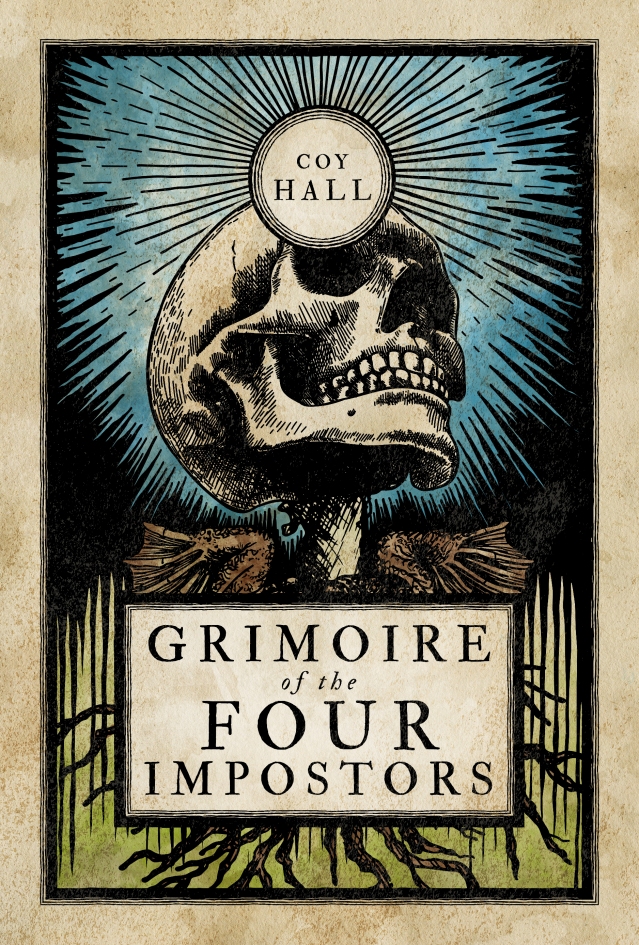 Journey into the Occult, Where History is Horror

Presented in six tales, GRIMOIRE OF THE FOUR IMPOSTORS takes readers on a dark tour of the 17th century, where corners of the world stand in shadow. Here grimoires possess secrets, impostors beguile the unwary, temptation turns macabre, and the night is no friend.

Nosetouch Press announces the upcoming publication of the folk horror-influenced debut novel, Grimoire of the Four Impostors, by author Coy Hall, featuring several main characters—a monk, an executioner, occult scholar, and adventurer—each who encounter an impostor who subverts their knowledge of the world, opening their eyes to unimaginable horrors and dark truths.

“Coy’s excellent work has turned up in several earlier Nosetouch Press collections, including the highly regarded

The Fiends in the Furrows anthologies,” said David Neal, co-publisher and editor-in-chief of Nosetouch Press, referring to the two-volume folk horror anthology that has been mentioned in the Guardian and several short stories of which have turned up in Best of Horror Fiction compilations. “We’re really happy to feature his novel. He’s a great writer with a distinctive vision and literary style that calls to mind the greats of classic weird fiction.”

A resident of Huntington, West Virginia and an associate professor with a Master of Arts in History from the University of Louisville, Hall’s expertise in European history of the 16th and 17th centuries and early 20th-century American history served him well in the crafting of the Grimoire.

“Coy Hall brings an otherworldly mix of medieval and modern in his fiction,” said Christine Scott, co-publisher and creative director of Nosetouch Press. “This unique blend, as well as his evocative writing style makes for a powerful book that should captivate discerning readers of folk horror and darkly atmospheric fantasy/historical fiction.”

Grimoire of the Four Impostors will be released on September 7, 2021, in hardcover, paperback, and ebook formats.

Nosetouch Press is an independent book publisher tandemly based in Chicago and Pittsburgh, with a commitment to bringing classical book design and excellent fiction to readers.

Coy Hall lives in West Virginia with his wife, and they share a home with their clumsy Great Pyrenees. Coy splits time as an author of horror and professor of history. History guides his writing, with most of his stories set in the past – sometimes the real past, sometimes an imagined one, but most often a mix of the two. Find out more about his stories and novels at www.coyhall.com.