Today we’re excited to bring you a cover reveal for Hippocampus Press‘ upcoming anthology, Under Twin Suns: Alternate Histories of the Yellow Sign, which hits shelves next month! It promises to be a must-read anthology for fans of Weird Fiction and is packed with brand new stories and poems from some of the best authors in the genre. A huge thank you to James Chambers and Hippocampus Press for letting us share this stunning, kickass cover from Aeron Alfrey! Below you can check out the cover, learn more about the collection, and find a pre-order link to snag your copy. Hippocampus Press is also releasing The Harbor Master: Best Weird Stories of Robert W. Chambers simultaneously with Under Twin Suns and you can find that link below as well.

“I pray God will curse the writer, as the writer has cursed the world with this beautiful, stupendous creation, terrible in its simplicity, irresistible in its truth…”

“When I first read The King in Yellow some twenty-five years ago,” said publisher Derrick Hussey, “I experienced a genuine ‘kick’ of otherworldliness that I don’t run across very often. It’s a thrill to feel that frisson again in the works of these modern writers, and an honor to publish their tales.”

Robert W. Chambers’ classic work of weird fiction, “The Repairer of Reputations,” introduced the world to “The King in Yellow,” a play in two acts, banned for its reputed power to drive mad anyone who reads its complete text. “The Yellow Sign,” used the experiences of an artist and his model to elaborate on the mythos of the Yellow King and the Yellow Sign. In those tales Chambers crafted fascinating glimpses of a cosmos populated by conspiracies, government-sanctioned suicide chambers, haunted artists, premonitions of death, unreliable narrators—and dark, enigmatic occurrences tainted by the alien world of Carcosa, where the King rules in his tattered yellow mantle. In Carcosa, black stars rise and Cassilda and Camilla speak and sing. In Carcosa, eyes peer from within pallid masks to gaze across Lake Hali at the setting of twin suns.

“When I began work on this anthology in the summer of 2019, I never imagined how much would change in the world or how eerily relevant the concept of the Pallid Mask referenced in the King in Yellow stories would become. I’m thrilled to present this collection of amazing, weird stories from a group of supremely talented writers.” 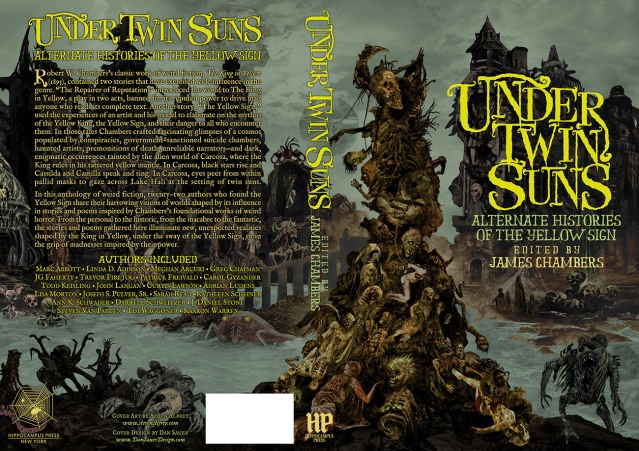 In this anthology, twenty-two authors who found the Yellow Sign, share their harrowing visions of worlds shaped by its influence in stories and poems inspired by Chamber’s foundational works of weird horror. From the personal to the historic, from the macabre to the fantastic, the stories and poems gathered here illuminate new, unexpected realities shaped by the King in Yellow, under the sway of the Yellow Sign, or in the grip of madnesses inspired by their power. What terrifying knowledge and unsettling experiences have these creative souls ushered into our world? What visions do they bring from Carcosa, from beneath the mantle of the Yellow King—from under twin suns?

We are especially pleased to include a previously unpublished novella, “less… light…” by the late Joseph S. Pulver, whose stories and anthologies did so much to help the King in Yellow mythos stand on its own in weird fiction.

PRE-ORDER: Under Twin Suns: Alternate Histories of the Yellow Sign