Fiction: Laurel Hightower “The Smallest Parts (The Making of Things)”

You die from the toes up. Did you know that? I mean, not if you die suddenly, I guess. Like if you get hit by a car, you probably start dying wherever the wheels make impact with something vital. I don’t know, I’m not an expert on that kind of death. But if you die in bed, like so many people think they want to, it starts with your toes. I learned that when I took a twelve week training course to get certified as a nurse’s assistant. There was a whole section on dealing with death. I’d had experience, losing people, but I’m Southern, so maybe I expected everything to be hushed and vaguely comforting euphemisms. Dumb in retrospect, but I was nineteen, so I forgive myself.

There’s a special shroud, too. Apparently they keep it in the bottom of one of your drawers in your hospital room. It makes sense, from a practical standpoint, but ever after that, I checked every hospital room I was ever in, to see if I could find it. That wasn’t as many rooms as you might think, because as it turns out, I wasn’t cut out for the medical profession. It wasn’t because of the death thing, at least I don’t think, but it stuck with me. Especially the part about the toes.

I had so many questions. Could you feel it, when the process started? Your living, sparking cells going dark at your lowest extremities. They get cold first, but maybe you don’t notice since your feet are always cold these days. But maybe you realize you can’t move them. You look down at those innocuous little stubs, twisted in this direction or that, calluses out of control and who knows the last time you had a pedicure. You’ve just been so tired, these last few years. So you notice your toes, and you feel friendly toward them, so you give them a wiggle. But they don’t respond. And at first it’s just curious, and you think they must be asleep, but no matter what you do, they won’t answer your commands. You start to feel a little panicky, wondering if you’re paralyzed, they said that could happen in rare cases, but the rest of your body is working, even if a little sluggish.

So you think maybe it’s the medication, making you numb, or even edema. That’s another symptom, and you remember how, when you woke up the morning after your c-section, you thought the epidural was still in because you couldn’t move your legs. When you said something to the nurse, she looked confused, then she lifted the sheet covering your legs and you screamed. You weren’t expecting it, the swelling that made them elephantine, almost immobile, but it went away in time, so maybe that’s what’s going on here. So you lift the sheet, but your legs look like they always have, a little thick but nothing out of the ordinary.

Can you see the difference in your toes? When you look again, do they seem any different? Does rigor set in early, or is it just that indefinable difference in appearance that separates dead flesh from live? And if you can see it, are you horrified, watching inexorable death creep up your body? Or are you peaceful? Aren’t you supposed to die in your sleep?

But you’re not sleeping, you’re awake, and how could you be peaceful? You knew this was coming, it’s not a surprise, but in a way it’s always a surprise. You thought you’d have a little more time, Drew and Angie and the kids are coming this afternoon and you were sure you’d have that, at least. You’ve heard of people fighting to stick around, hanging on to make it through Christmas or whatever. All you want is a few more hours, and surely you can fight that hard. You’ve always been a fighter, so you start.

But what if you do manage to stop the process somehow, the reaper’s job only part way through? Will your toes, and now your calves, come back to you, or have they already crossed over? Are they ghost toes, just waiting for you to catch up?

You’re not sure how this kind of fight is supposed to go. You can’t visualize your enemy, and anyway you don’t want to think of death as your enemy. That would upset the delicate balance of peace you’ve cultivated. You’re at peace with dying, because you have to be. For Drew’s sake, and the kids. Your grand babies, not babies anymore but still too young to be watching this happen. You wonder if instead of fighting, you should try letting go to spare them this. What if they were to walk in with your death half done? What might that do to their tender psyches?

It turns out you’re as vague on the process of letting go as you are of fighting. You were always bad at meditation, clearing your mind and relaxing. You cleared your mind with exercise, back when you were fit enough, and with hard work long after you should have. But you can’t get out of this bed, and the call button, wrapped around the bed rail, has fallen where you cannot reach. You try to call out but your voice is thin, the breath behind it weak and flimsy. You banish that and concentrate again on fighting.

How do you fight? You strike back, right? You have no weapons, so instead you push. You press against the slow creep turning your body into unresponsive concrete. It’s reached your knee caps now, so that’s where you start, picturing yourself standing Gandalf-style on the bridge of your thighs, palms pressed outward against death. You push as hard as you can against it, one woman holding back a tidal wave, but a strange whoosh happens and you find yourself squashed against your own sternum. Before you, the ooze of finality has crossed and claimed most of your torso without you even seeing. Was that because you were unconscious? Or did that push do it? Did you speed your own ticking clock?

Either way, it doesn’t seem to be reversible, and you’re afraid of what will happen when it covers the rest of your lungs. Already it’s hard to draw breath, and as a lifelong asthmatic, you recoil from the idea of a slow suffocation.

But it’s coming for you. It’s not stopping, and whoever these other folks were, the ones who made it to one last holiday or anniversary or birthday, it’s not you. You won’t make it out of this room alive. You don’t remember when I became you, but that’s where we are, because second person is hard to pull off, but not as hard as watching yourself die.

You stare it down, this wave of your own demise, watching the changing of your flesh into stone. It’s still coming, and soon you’ll be trapped in your head, if you can’t find a way out.

Out. Is that it? Is that what you’re supposed to be doing, to miss experiencing this execution? Did you miss check out time, and now you’re caught in the cleaner’s sweep? Where’s the white light? The out of body experience? No more thought of sticking around, you just don’t want to be there when death reaches you.

But you see nothing, hear nothing that can help you. You’re alone, and the cold is getting close. Where to go? Your gaze bounces as much as it can, searching for the exit sign.

There. To your right, a forgotten corner. You have just enough room to slide past the encroaching dark: it hasn’t found this place yet. There’s a corridor in front of you, and you take it. You don’t want to be there to see the end.

The farther you travel, the more it seems as though something at the end of this place is calling you. Did you leave your body after all? Is this your way to the other side? But no. You arrive, after a brief narrowing, in a sort of wide entryway, with five paths leading from it. It feels warm here, and familiar. You reach out to touch the walls of this place, and find tenderness. It seems to touch you back, to pull you into an embrace, and you stretch out to fill your new space. You reach through the five paths and touch the rough end of each one.

More warmth, and you’re in a full body hug, now. Not from this place, because you are this place now, and it is you. You’re being held by someone who loves you, who you love, and they are crying. You could reassure them, tell them it’s not goodbye, but your voice is gone along with the rest of you, so all you can do is squeeze back.

You have been called home. It’s not a destination you expected, but it is one you remember well. You have done good and loving work from this home, back when it was only a small part of you. Now it is you, and peace has returned to your heart. It may not last forever, but it’s now, and there is much to do. So you stretch, and you move, and you feel your way as you ponder how best to separate yourself from what you used to be. How to prune what has died so you may go on as what you have become, for however long you’re here. You may have a hard time blending in this form, but you’ll find a way. Maybe even make yourself useful, join a household of sorts. The kind of kooks who are so creepy themselves, you’ll feel right at home.

That would be nice. 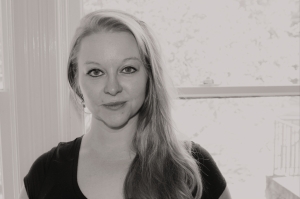 Laurel Hightower grew up in Kentucky, attending college in California and Tennessee before returning home to horse country, where she lives with her husband, son and two rescue animals. She works as a paralegal in a mid-size firm, wrangling litigators by day and writing at night. A bourbon and beer girl, she’s a fan of horror movies and true life ghost stories, and is one third of the Ink Heist podcast team. She is the author of Whispers in the Dark, Crossroads and has several pieces of short fiction slated for publication in various upcoming anthologies.