A Book Review by Thomas Joyce

“An adventure in weird and wonderful storytelling with a murky, emotional depth that will delight fans and new readers alike.” 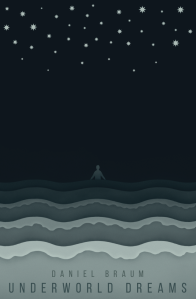 Author Daniel Braum maybe based in New York City, but his magical and mysterious fiction takes place in many exotic locations all over the world. He has explored them through his short fiction collections The Night Marchers and Other Strange Tales (Cemetery Dance, 2016), The Wish Mechanics: Stories of the Strange and Fantastic (Independent Legions, 2017), the chapbook collection Yeti Tiger Dragon (Dim Shores, 2016), and his debut novel The Serpent’s Shadow (Cemetery Dance, 2019). He also edited the anthology Spirits Unwrapped (Lethe Press, 2019), exploring stories featuring the oft overlooked Egyptian “mummy” legend as their main focus. Now he has returned with his latest short story collection.

“How to Stay Afloat When Drowning” follows an unnamed young man dealing with a deep sense of grief while trying to help his sister land a client for the surf apparel business she inherited from their parents. The protagonist intersperses the action of the present, preparing to accompany his sister and the client on a fishing trip, with emotional flashbacks to his traumatic past. A meeting with a mysterious and attractive young woman offers a link with events in his past and this fishing trip, leading to an unnerving and melancholy conclusion. Braum’s portrayal of the forlorn narrator is as moving as the final confrontation is unsettling.

In “Goodnight Kookaburra”, an American working construction in Australia ruminates on a past romantic encounter while he accompanies a colleague on a visit to her family home. He admits that, of all the wildlife in Australia, what he really wants to hear is the call of the Kookaburra. So, she takes him on a hike and afterwards they visit with her parents. After receiving a frosty reception from her father, and encountering a strange yet familiar woman in the orchard, the night descends into a carefree party atmosphere with which he cannot align himself, opting instead for the outdoors and the company of the Kookaburras.

In “The Monkey Coat”, a recently divorced woman finds a coat made from monkey fur in her storage locker, the only thing her ex left behind after he emptied the accounts and took almost everything they have. An undercurrent of seething rage comes to the surface, seemingly connected to her subconscious attachment to the new coat, much to the dismay of her grown-up daughter. It is more than just a tale of a scorned woman seeking revenge, as we see June fighting to maintain a hold on her sanity while she feels pushed to the brink by the behaviour of the men in her life.

Teenage angst takes centre stage in “Tommy’s Shadow” where narrator Marco finds his band finishing runner-up to popular Tommy’s band in the battle of the bands yet again. He also seems to be second fiddle when it comes to the affections of Alana, someone he felt shared his feelings, before she ended up with Tommy. Rather than accept his lot in life, Marco places all of the blame and responsibility for his underdog role at Tommy’s feet, and a chance encounter with a mysterious stranger in an abandoned asylum gives him the opportunity to get exactly what he wants. But at what cost? Braum’s examination of the troubled loner persona, even if a lot of it is sought and self-inflicted by Marco, makes for a really interesting story.

A young man fresh from a stint in a juvenile detention centre and making a meagre living while staying in his Uncle’s basement meets a strange yet alluring woman on the train in “Rebbe Yetse’s Shadow”. Taken with her beauty, and undeterred by her strange insistence on meeting with the presumed-dead titular character for guidance, he can’t help but seek her out. This leads him to a night-time journey to a cemetery and a horrific discovery. But, even then, the rabbi isn’t done with the young man, offering a special and delightfully creepy type of guidance, for a price. For a young man who has lost his way, the opportunity to visit with a long-dead loved one for advice is too good to turn down, even if it means committing the worst crime of all. At equal turns creepy and emotional, Braum has crafted a uniquely weird story.

“Cloudland Earthbound” explores a more definitively supernatural tale, taking place in Brisbane, Australia in 1982. The local Premier is greedily buying up a lot of the property for an undisclosed and mysterious reason. And he has his eyes firmly set on the Cloudland Dance Hall. But Ben Meyerson, who inherited the business and the fight from his father, is vehemently opposed to the idea of selling, even when the Premier sends his goons to twist his arm. There is something magical about the dance hall, and Ben’s family’s connection to it, something the Premier wants all for himself. On a surface level, it makes for an entertaining tale. But the real story concerns Ben’s strained relationship with his wife, and his repeated attempts to connect with his son, always seemingly in the shadow of his father and the legacy he left along with the dance hall.

Another tale of the extremely fantastic, “Between Our Earth and The Moon” concerns a sorcerer-for-hire called Nate who is approached by a construction foreman with a unique problem: his work on the underground crosstown line is being held up by what he describes as invisible creatures, demons. But, naturally for a Daniel Braum story, there is more to these demons than meets the eye, and Nate is tasked with getting rid of them so the foreman can get on with his plan. Nate is consumed with guilt and grief for someone in his past and is given the opportunity to start over, in a manner of speaking. There are numerous characters in this story who all seem to have their own, secret agendas, giving it more than a hint of mystery, adding to the already multi-layered narrative Braum has weaved.

In “Palankar”, Jake accompanies his wayward brother, Steven, on a dive off of the Palankar Reef, just like the first time their father brought them there decades before. He isn’t there just to have fun with his brother; Steven has two young daughters back home from a failed marriage, and his ex is no longer in the picture, leaving Jake and his wife to take on the guardianship of the girls. Jake wants to remind Steven of his responsibilities. But Steven seems to be consumed by the dive, consumed by a desire for something he can only find in the deep. Not for the first time in this collection, the supernatural element is used to explore the underlying themes of family and regret, relationships and difficult choices, to great effect.

We are transported to Panama in “Sogni Del Mundo Sotteraneo (Underworld Dreams)”, in the company of Professor Armstrong and his group of law students, including our unnamed narrator. From the beginning, it is clear that the narrator considers himself on the fringe of the group, with the others embracing the freedom of being in a warm and exotic foreign country. When not studying, they indulge in alcohol and parties and each other’s company. But the narrator has a girlfriend back home who he is vehemently loyal to, even spurning the advances of another student. But, through intense self-reflection, and a visit to the native Kuna people, he soon experiences some strange visions and realisations about himself. Although it is ultimately a story about choices and the narrator’s self-discovery, Braum takes the opportunity to flex his considerable descriptive powers to convey the character’s magical journey in a fantastic way.

The final story, “Rum Punch is Going Down”, takes place on a mysterious and unknown island off of the coast of Belize in 1986, where it seems anyone can go to lose themselves. Which seems to be what the narrator is doing. He finds himself travelling to the island in a boat with a strange cast of characters, all with their own mysterious stories to which we are only given the briefest of glances. Our narrator, who gains the nickname “Rum Punch” thanks to an act of generosity, gets into a confrontation with one of the homeless vagrants and commits a terrible act. Or does he? Along with the ambiguity of the characters and the location, we can never truly be sure about what is happening. It makes for a disorientating reading experience but, what is clear, is the melancholy figure Rum Punch makes. As with all of his characters, Braum gives him life and compels us to care for him.

Braum is known to begin with a setting and mould his characters and story to this framework. But this doesn’t mean that he doesn’t pay due care and attention to the players; in fact, the way he explores the relationships between them in each of the aforementioned stories is exceptional and makes for captivating reading. Whether it takes place on an unnamed tropical island, post-Just Cause Panama, the eastern coast of Australia or even somewhere closer to home like Queens, NYC, the complex characters are the focus. In those brighter settings there is a juxtaposition between the darkness of the characters and the light of the setting – horror stories don’t have to always be set at night or in gloomy situations. And they don’t always have to answer every question they pose; reality is rarely so neat and orderly. The destination matters less than the journey and, in the case of Daniel Braum’s new collection, the journey is an adventure in weird and wonderful storytelling with a murky, emotional depth that will delight fans and new readers alike.

BUY A COPY OF UNDERWORLD DREAMS