A Symphony of Despair 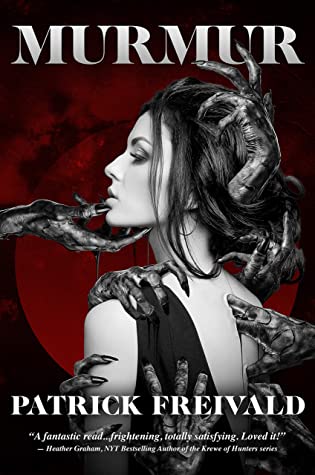 One of the most exciting things about being in the book reviewing community is when you discover authors for the first time and there is that moment where you’re totally blown away by their talent. That’s the experience I had while I was reading Patrick Freivald’s latest novel, Murmur, from Barking Deer Press. The novel focuses on Davis MacArthur, who has struggled with issues of alcoholism and mental illness for most of his life. He was able to get help to manage his illness and control the literal demon bound to him to become a world-class violinist. Born into a world of privilege, Davis feels like he’s at the top of the world, all things considered. He’s achieved celebrity status, lives a life of luxury with his partner Alisha, and seemingly has control over his life for the first time in a long time. Even the demon Murmur, who he keeps in a pill bottle in his jacket,  seems to be little more than a minor annoyance to him now. But Davis’ sense of control begins to slip when he meets the mysterious woman Chantal, who draws him into a deadly game of seduction and violence. As the defenses Davis has spent years building begin to crumble, he must decide how far he is willing to go in order to save the ones he loves.

One of my favorite things about Murmur is the way Freivald frames the story and turns familiar themes into something stunningly unique. Davis seems like an ordinary guy at first (you know, aside from being a world class violinist) and when we see that he’s bound to Murmur early in the novel, the natural assumption is that he made a deal that went sideways and is now controlled by the demon. But it’s clear right from the start that Davis has more knowledge and power than most people would have in that situation. I also loved the stylistic choice of keeping the backstory of how Davis and Murmur began their relationship to a minimum. Freivald gives the reader just enough information about Murmur and how Davis may have stumbled into the occult, but doesn’t kill the story’s momentum by loading the pages with tons of backstory. This may bother some readers who desperately want to hear more about this underground world of arcane knowledge, but I thought it was a clever way to keep the reader engaged. It allows readers to let their imaginations run wild, filling in the gaps with their own possibilities.

While Murmur isn’t a possession story per se, it does utilize some of those familiar tropes, but in a fresh way. A lot of those stories focus on small towns or “everyday” families, but Freivald’s story centers the evil and danger in a world of privilege, private high-rises and wealth. I feel like part of that plays in to Davis’ personality and makes him an interesting character in this particular subgenre. While anyone else would be terrified at being in a symbiotic relationship to a demon, Davis’ arrogance shines through right from the beginning. Murmur is constantly bombarding Davis with evil thoughts or seducing him with promises of an easy way out for the low, low price of his immortal soul. Despite his best attempts and vile threats against Davis’ and his loved ones, Davis treats Murmur like a pest at best. He feels like he has total control, that his precautions and rituals make him virtually untouchable. I found this aspect of Davis’ character wildly intriguing, especially as the events of the novel unfolded.

While horror fans may be drawn to the nightmarish visions of demons, blood and viscera Freivald paints throughout the course of the novel, he expertly weaves in scenes of tense psychological horror as well. The combination of these approaches ratchets the tension up significantly and the result is a gripping narrative you can’t tear your eyes away from for very long. I had seen Murmur billed as erotic horror, and I’ll admit, I had a few reservations at first. I wasn’t sure it would be a good fit based on past reading experiences, but this was a perfect example of how stepping outside your comfort zone can lead to rewarding reading experiences. I lost count at how many times I’d hit a particular scene, stop myself, and think, “Damn, this book is so fucking good”. If you’re looking for an engaging story featuring imaginative scenes that puts a fresh spin on demons  with a hint of eroticism, Murmur is a must-read addition to your bookshelves. This was my first experience with Freivald’s work, but it definitely won’t be my last.