Today we welcome J. Danielle Dorn to Ink Heist with their story, “The Backwards Man”. We loved Dorn’s debut novel Devil’s Call which is an interesting mash-up of the Horror and Western genres set in 1859. It puts a fresh spin on the revenge tale, a great portrayal of witches, and one of the most badass characters in recent memory, Li Lian. It was that novel that made us fall in love with Dorn’s writing and if you haven’t read it yet, we highly recommend picking up a copy. We knew when kickstarted our original fiction series, we had to ask them to write a story. We’re honored to publish “The Backwards Man” on Ink Heist, and we hope you love it as much as we do.

No one looks up when the backwards man boards the bus.

You first saw him a couple Fridays ago, after work. You were already on the bus, in your usual spot. Middle of the double-length, just behind the back door, in an aisle seat. If and when the bus gets too crowded you’ll shove over, sit by the window and close your eyes. Until then, you prefer to sit where you can see what’s going on.

It’s thirty-eight minutes from the hospital entrance to the side street intersection where you hop off, thirty-eight minutes where all you do is sit and watch the other riders as they come and go. Most of the time you pipe an episode of some podcast or another into the earbuds nestled beneath your cap, occasionally suppressing laughter so your fellows don’t think you’ve lost your mind.

They wouldn’t notice. Everyone on that bus, on any bus anywhere in the world, is just trying to get to where they’re going in one piece. Your therapist reminds you of this often. Nobody is looking at you. Nobody is judging you. You’re safe out in the world.

Still downtown, technically, still in what the suburbanites would call “the hood,” like any place isn’t a hood if that’s where home is. The backwards man got on with two other people, one carrying groceries and the other carrying an infant, and you only noticed him because you were facing the front of the bus anyway.

Being able to see out the front window helps with the motion sickness.

He might have had long hair, or maybe he had a beanie pulled down over his eyes. Something occluded his face, and at a glance you couldn’t discern what it was. He got on, and his arm bent awkward to feed his fare to the machine, elbow pointed towards the sky instead of the ground like a normal person’s, and once the women had stowed their loads and taken their seats you were able to assess how he walked.

His knees folded in such a way that you remember thinking, This fool really is walking backwards.

Walking backwards, not appearing to see where he was going. Your stomach protested the fact you were watching the interior of the vehicle rather than the road, and you swallowed down the nausea, forced yourself to look straight ahead again. Another person’s goofiness was none of your concern.

Then your stop came, and you hustled off the bus, and aside from mentioning him to your wife when the two of you were sharing your days over dinner, sharing a brief laugh over how ridiculous people can be sometimes, you didn’t think anything of it.

The next time you saw him was maybe a week later, after work again. He got on one stop sooner than he had the last time, hidden behind a trio of teenagers. They ignored him, their boisterous conversation filling the bus with insults and laughter. All the way to the back they went, and the backwards man made his way to a spot a little bit closer to you than he had the week before.

That time, you caught yourself looking at his legs. At least, as much as you could look at them. The backwards man was wearing loose jeans and a baggy sweatshirt, the latter covering the former just enough that you couldn’t determine whether he had his clothes on the right way or not. And then he sat down. And he was still there when you got off at your stop.

I saw the backwards man again today, you told your wife over dinner.

She asked, Was he still walking backwards?

It was midway through this week when you saw him again, and again he boarded one stop closer than the last time. You weren’t paying attention to who got on because just like the times that came before, the backwards man was at the back of the group.

It helps, you find, to eat something with some sugar in it before you get on the bus. To keep your own physiological processes in check. According to the doctors you’ve shot the shit with on your lunch breaks, you’re just a patient care tech at the local hospital but the way the brain works is interesting to you, motion sickness is thought to be a miscommunication between the nerves responsible for sensing the body’s movement, or the movement of the world in relation to the body, and the parts of the brain that process all of that incoming information. Just a misfire, a small one, is enough to upset a host of other processes.

That third time, you were sure the backwards man knew you were staring at him. There was no way he couldn’t feel your eyes on him even if he had his own covered. His hair didn’t look like hair, at least for the few seconds you were able to watch him before a screaming sort of nausea came over you. Seaweed, maybe, or algae. Something damp and clinging. Every nerve in your body, from the tightly packed parcel of gray matter in your skull down to the microscopic branches in your fingertips, was hollering for you to look away.

You didn’t want to throw up on the damn bus, so you closed your eyes and took a deep breath. When you opened them again, the backwards man was two rows ahead of you. Taking a deep slow breath is imperative when staving off nausea, and you felt as if a briny hand were pressed over your face when you tried to inhale and look at the backwards man at the same time.

His knees bent the wrong way, but his feet. You dropped your gaze to keep the contents of your stomach where they were, and you got a good look at his feet. Leather boots, easily a size twelve, and you would have thought if he was just walking backwards out of some kind of compulsion you would be looking at the heels of his shoes, but your eyes landed on his laces. They were red. Everything about the man was facing the wrong direction, except for his feet.

He took a seat before nausea overwhelmed you.

And even though you kept your eyes aimed forward, you felt the backwards man at the edge of your vision. This was an absurd thought, but you knew he was watching you. You couldn’t blame him. You were the only person on the bus paying any attention to him, let alone staring at him like you were.

Yesterday you knew he was coming before he even got on the bus. You knew he was at the back of the group of buttoned-down folks who climb on near the courthouse before the bus had even groaned up to the curb. You knew he was going to sit in the row ahead of you. It was empty. Of course he sat there.

Your phone lit up with a text message, and you courted nausea to catch a glimpse of it when the bus stopped again.

You sent back, Yeah.

Another message. Another glance down when the bus was stopped. On any other day you would have looked up and seen the back of another person’s head and been at ease. As at ease as you get, anyway.

If you looked up, and you saw the backwards man’s face, you knew you would lose what was left of your damned mind. Deep in your gut, so deep down it wouldn’t dislodge even if you did start vomiting, you knew.

Send me a pic, the text message said. I want to see this guy.

When your stop came, you swallowed down the sludge that was creeping up your esophagus and snatched up your bag and hustled out the back door so fast you nearly took out some poor kid who was coming up behind you. You would have berated yourself on any other day. Felt guilty for taking up space in the world, for putting someone else out.

You had to get off that bus. You had to confirm what you already knew. That the backwards man was watching you as the bus pulled away.

No, you responded once your heartbeat had died down enough for you to be able to hear yourself think. You don’t.

Last night, you couldn’t bring yourself to eat anything. It worried your wife, and she asked if there was a bug going around the hospital, put the back of her hand to your forehead to feel for a fever. There’s no bug, and you told her as much.

That dude on the bus has you this freaked, huh? she asked.

I guess, you said.

What, does he remind you of someone, or something?

Maybe, you said. I dunno.

She took you to bed and this morning was normal, everything was normal, except for you went the entire shift at the hospital with an anchor in your gut. One of the nurses asked if you were okay, and another one said, through a mouthful of salad, that if you were sick to stay the hell away from her.

Nothing to eat all day, a few sips of ginger ale here and there to try and settle your stomach, an energy drink so you didn’t add a caffeine withdrawal headache to your list of things to worry about. Bodies are complicated. It doesn’t take much to throw them off balance.

The shift ended. The elevator spat you out, you climbed aboard, you took your seat. You put your ear buds in. You prepped your phone’s camera and returned it to your pocket. You take a deep breath. You don’t have to look right at him, you just have to take a photo and send it to your wife.

No one looks up when the backwards man boards the bus. 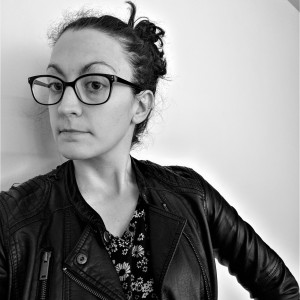