My Dead and Blackened Heart

My Dead and Blackened Heart By Andrew Freudenberg

A Book Review by Tony Jones 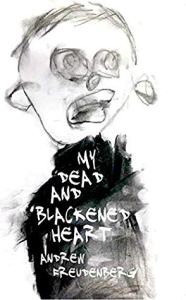 I find reviewing anthologies take up more time than I can spare, so I often avoid them unless it is something I genuinely want to read. Occasionally Andrew Freudenberg and I cross paths in the online horror reviewing community, so I approached his debut anthology My Dead and Blackened Heart with some interest, curious to see how a fellow reviewer handled himself on the other side of the literary fence. A number of the inclusions had previously been published in well-respected anthologies including Great British Horror 2: Dark Satanic Mills (Black Shuck Books, 2017), Splatterpunk Saints (2013), and The Black Room Manuscripts Volume Three (The Sinister Horror Company, 2018) a popular collection which genre authors are always delighted to feature in. The Sinister Horror Company is also responsible for My Dead and Blackened Heart.

I normally read anthologies slowly, often rotating with a novel or two, but I broke that habit with this collection and Andrew Freudenberg should take that as a major compliment. I whizzed through the 137 pages featuring fourteen stories, completing it in a couple of sittings. My Dead and Blackened Heart’s major strength lies within the sheer breadth of the content matter, when one story concludes the reader has little idea of what treat awaits within the next. That was an unexpected and unpredictable pleasure to read. Because the majority of the stories were relatively short, it was very easy to start “just one more” and the stories were rapidly eaten up and the collection sadly finished. The occasional sequence was slightly rough around the edges, but this is part of the charm anthologies often offer. Ultimately, it was an exceptionally engaging and very easy to read mix which wore its (blackened) heart on its sleeve. Be aware though, some stories are incredibly dark, with bleak and uncompromising endings.

I’m going to pick out some of my favourites (which were many) and start with the deliciously unpleasant Milkshake and its sequel Meat Sweets which pops up later in the collection. Reminiscent of Roald Dahl’s Pig, Joseph D’Lacey’s Meat and even a taste of The Texas Chainsaw Massacre, after the death of a parent, Louis is sent to live with his extended family in the countryside. Life on the farm is far from what he expected; Louis is shocked when he finds out this is not a normal family business and his cousin Gideon and uncle Moses do not farm sheep. These were two of the gorier inclusions in the collection but were topped by the decidedly brutal Teppenyaki of Truth in which the reader needs to be prepared for torture and gleeful dismemberment in a splatterpunk style story. Turner, a dodgy gangster with a shady past, is invited to an establishment in the middle of nowhere believing a new job awaits. However, what lurks inside is much more unsavoury and Turner’s indiscretions are just about to catch up with him. Combined, these were probably the most gruesome entries in the anthology.

The theme of family and the disintegration of the family unit links many of the entries, often with children playing a key role, Pater in Tenebris was a powerful example of this. Like several of the other stories, the reader is dropped into a dicey situation and little explanation is given into how circumstances arrived at that moment, in fact none is required, and we can use our own imagination. A father and his family hide in a fortified house after a zombie holocaust and when the story opens, the main character has been scratched and is slowly becoming infected. What follows deals with the fallout. This is a moving meditation on the lengths the father goes to save his wife and kids, concluding with both a knock-out and heart-breaking ending.

Similarly, in Nose to the Window proceedings open with an unexplained environmental catastrophe with Greg and his young daughter Zoe escaping the burning city, making an odd detour to visit the grave of his late wife. Along the way, they meet early signs of civilization beginning to collapse in what was a moving road-trip which never gave any indication there was going to be gold or a silver lining at the end of the rainbow. Both Pater in Tenebris and Nose to the Window have similar themes of fathers struggling to defend their families in tragic circumstances which are beyond their control.

Many of the stories make very effective use of children; none better that The Cardiac Ordeal which deals with the nightmare parents dread the most, the disappearance of a child. Once it gets going, the tale has all the hallmarks of a pulp horror story, but it also expresses perfectly the horrible helplessness individuals feel in such a terrifying situation and the blame-game which might follow. Shane and Linda are happily married, with financial difficulties and a two-year old daughter, out of the blue she disappears from their flat whilst Shane is at work. Linda is distraught and the police are flummoxed. Then, unexpectedly, a neighbour who Shane has never seen before offers to help, but at a terrible price. This was an outstanding story with another haunting ending. In a complete change of pace, Charlie’s Turn, two little boys discover an injured German soldier trapped in a tree after his plane crashed in a local forest with peer pressure as a background theme. This was one of the shortest entries in the collection and might have been spun out further as the reader is left dangling with the poor German, on the other hand let your imagination do the work.

Sticking with the Second World War period and returning to the theme of missing children, Hope Eternal features an invalided soldier searching the ruins of a blitzed London of his missing daughter after being informed that his wife was dead, but perhaps even worse, was provided no information on his daughter’s fate or whereabouts, but like the parents in The Cardiac Ordeal, will go to any lengths to find her. Something Akin to Despair abandons the war and time-warps into space with a low-key study of loneliness, the sole survivor of a disaster on a spaceship wanders the empty corridors, realising he many never talk to another human being ever again.  In A Bitter Parliament Dan and Maria are looking for a quiet weekend away in a rented cottage with their dog Shark when they realise things are quite not right, before long they will be wishing they were anywhere but there, even the spaceship in Hope Eternal, would be preferable than the fate which awaits them.

The final two I will name-check are the only inclusions which might be regarded as anything close to the traditional ghost story. The very short, Beyond the Book, concerns a 92-year-old man who has been using Facebook for forty years and the online friendship he has with Bob, whom he has corresponded with for many years, but never met. Us early users of Facebook have been using the system since the early days of 2007, so perhaps this sad fate awaits us! Finally, in Scorch we have a good, old fashioned, haunted house story. Toby and Lisa are a young homeless couple who have been living on the streets for a few weeks when they discover an, invitingly empty, house. There might be no other people, but they are by no means alone.

Overall My Dead and Blackened Heart is a very fine debut collection brimming with great stories and clever ideas which are very easy to read, some meditating on parenthood and the threat to the family. This excellent anthology highlights the beauty of the short story; they play by their own rules and you can make them as dark and as uncompromising as you choose, with endings which tread the boards between bleak and nihilistic. This collection has a number of these and no smiley, happy people. Along the way My Dead and Blackened Heart covers considerable ground, from traditional horror through splatterpunk, zombies, war, gangsters and dark science fiction. It is well worth checking out.