UNWRAPPED #7 – An Interview with David Wellington

Hey, folks, we’re going to have a lot of cool stuff going on with author Daniel Braum, including a series of recorded interviews he’s done and will be doing with some pretty hot authors in the horror industry. And right now, with this interview, we’re starting a fun and informative countdown to Halloween with a series of conversations between Daniel and seven of the authors in his new anthology, Spirits Unwrapped. That said, we will get the hell out of your way and let Daniel and David Wellington take the floor. Enjoy. 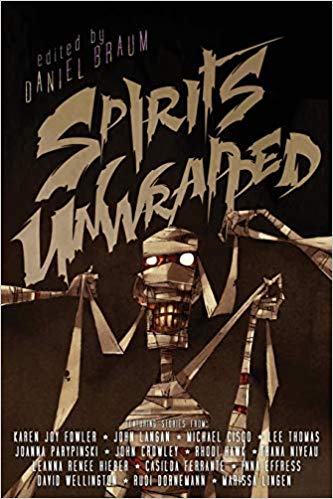 Today I speak with David Wellington, author of the Monster Island books about his work, monsters, and his short story “Mummy Fever” from the Spirits Unwrapped anthology out now from Lethe Press

DB: What is your favorite “classic” monster?

THE Monster. As in Frankenstein’s Monster. No question–I’ve always responded to the monster’s loneliness, and its isolation. I guess I’m just a goth kid at heart. Dracula is for cool kids, and the Wolfman is a jock. Give me a freak of science any day.

DB: Which was your favorite monster, if you could choose only one, to write about from your different book series?

You’re going to make me pick among my babies? Seriously, I love mummies, and always have. I put them in everywhere I can–there are way too many of them in my zombie books! Of the monsters I created, rather than just riffing on, the monster in my latest book, THE LAST ASTRONAUT, is the one I’m proudest of. We’re including aliens in this, right? Well, the one in LAST ASTRONAUT counts even if we’re not. But the most fun I had was probably writing the life story of Justinia Malvern, the very old vampire from my 13 BULLETS series. You gotta love an evil mastermind who’s always three steps ahead of the hero.

DB: What is the defining characteristic of the mummy as a story subject that is most interesting to you?

Mummies are immortal, but they’re not beholden to some weird ritual like vampires with their blood-drinking. Mummies get to experience deep time while not being tied to society, so they can have this sort of abstract view of the changing centuries. They’re very philosophical creatures, who start out completely draped in the iconography of a vanished era, then have to watch that culture get wiped away by the scouring sands… there’s something very romantic about being the last survivor of a lost time, right? And they don’t smell nearly as bad as you might think.

GRIMBLY HALL is a short story series I did just for fun. I knew I could never publish it, that it would never make money. So of course it became one of the best things I ever wrote. The stories are comic and wry and rarely end up where I was expecting. They tell the story of a mummy who might be familiar to readers of UNWRAPPED, but farther down his road–after his adventures in New York (and after a local monster hunter starts nosing around), Neville heads upstate and buys a mansion in Westchester County. A decidedly haunted mansion. He lives there with a flapper rusalka named Babs and his werewolf chauffeur Reggie and they have all sort of ridiculous adventures. If readers are interested, some of the stories are available for free on a website I set up for them: grimblyhall.com, which also has some amazing illustrations by my long-time artist pal Joel Carroll. The stories are altogether trivial, light, and goofy, and I have never enjoyed writing something more.

DB: How did it feel returning to write about Neferkare-ka-Imsety aka “Neville” for the Spiritis Unwrapped anthology?

Though this story was written after the Grimbly Hall project, it’s set chronologically before those stories, when Neville was fresh out of the tomb, so to speak, and still learning how to navigate modernity (or at least, the 1920s). It was really fun to show another side of his character, the mummy of action on the streets of New York. It was also great doing the research for this piece. There really was a craze for Egyptology in the early 20s, when King Tut’s tomb was discovered. People went wild for anything wrapped in linen…

DB: As a writer,what stands out to you as the biggest difference mummies as a monster and subject matter as opposed to the zombies, werewolves, vampires, and werewolves you’ve written about in your many books?

The trick with mummies is you have to find their agenda. Werewolves are wrestling with a curse, vampires want to suck your blood, zombies to eat your brains. They’ve got built in reasons for having adventures and getting into scrapes. Mummies, on the other hand, are usually perfectly content to sit around their tombs, only aroused to action when some idiot in a pith helmet breaks in to steal their death mask. As a writer you have to give the mummy a reason to do, well, anything.

DB: You’ve written horror, suspense, and science fiction books. What is similar and different about each genre to you. What you write about next if unfettered of the constraints of genre and the market expectations?

I don’t think there’s a real difference between the genres, other than the conventions and tropes we put on them. You can write a science fiction story with no spaceships in it, and a fantasy story with no elves, but people keep coming back to those things. What is, and should be, different is how a writer approaches any given story. If you start writing a book thinking, okay, this is going to be horror, so I’ll just put in a creaky old house and a madman with a chainsaw, you’re just going to write some boring cliche thing. You need to look at why each of the elements you’re using is important. Do you even need them? Is your story better served by something completely different? Stephen King’s greatest innovation was to take the monster out of the crumbling Victorian pile and put it in a suburban back yard. So I never really set off thinking, okay, this is going to be gothic horror, or weird fiction, or whatever. I start with an image, or a character. As to the question of what I would do if there were no constraints–well, of course, all art needs constraints. Writers do their best work when they’re forced into a corner and they need to be clever to figure their way out. But if I won the lottery tomorrow and could write anything I wanted? Probably more Grimbly Hall stories. I’d go back to the 1920s–and my favorite mummy. I think he’s got a lot more stories to tell.

DAVID WELLINGTON is the author of more than twenty novels including his first zombie epic MONSTER ISLAND and its sequels. His work has been published around the world and translated into more than a dozen languages including his 13 BULLETS vampire series, his werewolf story FROSTBITE., his fantasy novel DEN OF THIEVES, the thriller CHIMERA, and his science fiction novels FORSAKEN SKIES. His latest book, THE LAST ASTRONAUT, is a hybrid horror and science fiction novel. David Wellington lives and works in New York City. Follow him on Twitter @LastTrilobite, or on his website at davidwellington.net

DANIEL BRAUM is the author of the short story collections The Night Marchers and Other Strange Tales (Cemetery Dance), The Wish Mechanics: Stories of the Strange and Fantastic (Independent Legions 2017) and Yeti Tiger Dragon (Dim Shores 2016). His third collection, Underworld Dreams is forthcoming from Lethe Press in 2020. The Serpent’s Shadow, his first novel, was released from Cemetery Dance eBooks in July 2019. He is the editor of the Spirits Unwrapped anthology from Lethe Press and the host and founder of the Night Time Logic reading series in New York City which can also be heard on the Ink Heist podcast. He can be found at https://bloodandstardust.wordpress.com, www.facebook.com/DanielBraumFiction, and @danielbraum

SPIRITS UNWRAPPED can be ordered by your favorite local bookseller and also at Amazon, Barnes and Noble, and direct from the publisher.