Today we are excited to welcome Brian Fatah Steele to Ink Heist today with a guest post titled “Drunk Gods in Dying Towns”. The post talks about the inspiration and influences that inspired his upcoming novel, Celestial Seepage, which is out now through Alien Agenda Publishing. This is a great post and if you haven’t read any of Steele’s work yet, you’re missing out on a writer who crafts outstanding Cosmic Horror that is both dark and engaging.

I have a book coming out this month.

Celestial Seepage is a short novel of cosmic horror put out by Glenn Rolfe at Alien Agenda Publishing, edited by Erin Sweet Al-Mehairi, with cover art by Don Noble, and the kind support of Maurice Broaddus. It’s a stand-alone work about dimensional prisons, refugee gods, remixed realities, lunatic tyrants, ravenous hordes, and galactic genocide. Sure, it’s about monsters and gross stuff, but if you read that last sentence a bit closer, you’ll see I crammed some deeper themes along with the drunk higher entities.

I wrote this book in the first year after the last U.S. Presidential election. The country was changing, and I wanted to reflect some of that in the story. I don’t consider myself a political writer, but I feel that since I have this platform, it’s my responsibility to work with certain messages that are important to me. Greed, intolerance, zealotry, and other concepts that have become popular with a certain percentage of the population. Ultimately, I wanted to write a story about characters who are dealing with a universe that doesn’t always make sense. It’s something we are all too used to now.

A lot of cosmic horror deals with the unknowable, but I didn’t really go that route here. Celestial Seepage also has a good bit of what one might consider an urban fantasy vibe, with the characters “in the know.” I wanted the reader to understand motivations, personalities, and feel more invested. The lack of comprehension doesn’t come from our inability to conceive of the terrors themselves, but the origin of their atrocities. It’s much like in our own world where we can intellectually understand that the acts of murder and rape exist, but can’t wrap our heads around why they do.

The whole book is set in a fictionalized version of my hometown, all the places within based on real locations. Another major theme of the book is the collapse of the American town, and how many of these towns are struggling to cope if they even bother to acknowledge the ruin around them. Many don’t want to adapt to the changing times, clinging to an imaginary gilded past that never existed, convinced the phoenix will rise again when just one more factor falls in their favor. Meanwhile, poverty and drug abuse run rampant down streets filled with potholes and past boarded-up storefronts.

The first half of the book was written entirely to the discography of Bring Me The Horizon. It was meant to go along with the musical tastes of one of the characters. I discovered the band Gojira during the book and switched over to them during the latter half of the writing. It still fit the vibe. Both you’d consider modern metal/post-core or something. I’ve written to everything from The Glitch Mob and Lana Del Rey to God Is An Astronaut and The Birthday Massacre. There is a novelette set in this same universe that I wrote to Lorde that I’ll do something with eventually.

Along with disgusting mixed drinks and planet-killing weapons, the book has characters that love, grieve, and run in absolute fear. It’s a story about pathologically fighting the future and letting our homes decay around us. It’s about space gods tearing a town apart and those united to stop their rampage. I hope you give it a try.

CELESTIAL SEEPAGE is out now through Alien Agenda Publishing on Amazon.

About Celestial Seepage
Harper didn’t want to leave the library to take the temporary position at the Historical Society. There was something unsettling about the place, something sinister. She had no idea her presence there was about to trigger the escape of monstrous entities from a higher dimension, ones imprisoned there by their own kind decades ago.

Facing primordial horrors, Harper and her friends realize there have been alien gods in their midst all along, some closer than they ever could’ve believed. Together, they must stop a cataclysm that even gods can’t walk away from.

Brian Fatah Steele has written numerous published stories and titles in the cosmic horror, urban fantasy, and science fiction realms, receiving high praise for his unique blend of terror and strange. Celestial Seepage is no different in its attempt to unnerve you. 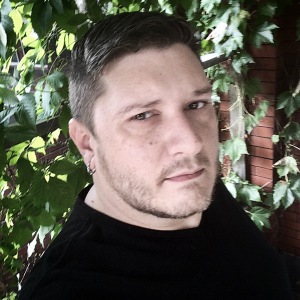 Brian Fatah Steele has been writing various types of dark fiction for over ten years, from horror to urban fantasy and science fiction. Growing up hooked on comic books and monster movies, his work gravitates towards anything imaginative and dynamic. Steele originally went to school for fine arts but finds himself far more fulfilled now by storytelling.
His work has appeared in 4POCALYPSE (Dark Red Press), BLOOD TYPE (Nightscape Press), WHITE FACE DEATH (Thirteen O’Clock Press), 4RCHETYPES (Dark Red Press), DEATH’S REALM (Grey Matter Press), THE IDOLATERS OF CTHULHU (Alban Lake Publishing), and the Bram Stoker Award-nominated DARK VISIONS, VOL.1 (Grey Matter Press). His own titles include BLEED AWAY THE SKY (Bloodshot Books) and THERE IS DARKNESS IN EVERY ROOM (Sinister Grin Press), along with the self-published YOUR ARMS AROUND ENTROPY, BRUTAL STARLIGHT, FURTHER THAN FATE, and IN BLEED COUNTRY.
Steele lives in Ohio with a few cats and survives on a diet of coffee and cigarettes. He spends his time still dabbling in visual art, vowing to fix up his house, acting as a part-time chaos entity, spending too many hours watching television, and probably working on his next writing project.
Find more about Brian, his books, and his interview other authors at his website.