There’s No Such Thing as Monsters by Ray Garton

I’m not going to get in the way of the great Ray Garton too much here, except to say, yeah, it’s the great Ray Garton, read it. But also to tell you to stick around after this stellar guest post to learn more about this most recent entry in the In Darkness Delight anthology series, “Creatures of the Night.”

“There’s No Such Thing as Monsters,” Our Parents Lied… 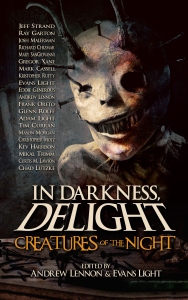 It is probably safe to say that, at some point in all of our childhoods, our parents or some other adult assured us that there is no such thing as monsters. They meant well when they told us this. It was an attempt to calm our fears about the monsters we saw in movies, on TV, or read about in books. And for the most part, that assurance served its purpose. As we grew older, we came to realize that those monsters were, in fact, imaginary. There are no such things as dragons, ogres, werewolves, vampires, kaiju, or ugly old hags with magical powers.

Once we leave childhood, though, we come to realize how hollow that assurance was. Sooner or later, we come to an unpleasant realization: No monsters? Are you serious? Just look around!

As I write this, two different monsters are dominating the news cycle.

One is nineteen-year-old Santino Legan who, on July 28, 2019, walked into the Gilroy Garlic Festival in northern California and opened fire on the crowd. Shooting randomly at the other attendees, Legan killed a six-year-old boy, a teenage girl, and a man in his twenties, while injuring a dozen others ages twelve to sixty-nine, before he was killed by police. In searching for a motive, police have seized materials that indicate different and sometimes, confusingly, competing ideologies. The only thing they know so far is that the young man had become xenophobic and hated everyone from people of color to people in Big Tech. In the midst of the shooting, someone in the band that had been playing asked Legan why he was doing it, to which he replied, “Because I’m really angry.”

The other monster is a man named Jeffrey Epstein, an apparent billionaire who, not unlike a James Bond villain, had his own private island, private plane, private helicopters, and who, for many years now, has been systematically abusing underage girls and trafficking them among his billionaire pals, with a list of potential customers that includes politicians, celebrities, world leaders, and we can only guess who else. For years, residents of nearby islands have referred to Epstein’s as “Pedophile Island,” and to the plane that taxied his friends there the “Lolita Express.” They all knew what he was up to, so it’s extremely difficult to believe that the people on that plane did not. His island includes a bizarre little temple that suggests he practices an unconventional religion, and some details suggest that it sits atop a subterranean chamber. Now that he’s in jail, authorities are trying to find out where his fortune came from because his reputation as a successful financier is now in question due to the fact that he had only one client on record. Speculation is rampant, including the possibility that Epstein was running a blackmail operation on behalf of a foreign country.

Those are only two examples of the real-life monsters who occupy the planet with us, but there are far more future mass shooters out there, far more sexual predators, far more monsters of every variety. But unlike the monsters in those movies and TV shows and books, they look just like us. They seem, on the surface, to be nothing more than people, not unlike ourselves. But make no mistake, they are monsters.

Then why did our parents and other adults tell us that lie? Because they did not want us to grow up to be fearful, paranoid nut cases. They knew that the world is full of plenty of reasons to be paranoid nut cases and they wanted to protect us from that as long as they could, so they told us that monsters—those big, ugly things in the movies, TV shows, and books—did not exist. They knew better, of course, than to believe that monsters do not exist, they just wanted to assure us, for the time being, that those particular monsters were not real.

They usually do not get around to telling us that plenty of other monsters exist. That’s something most of us figure out on our own.

If the world is filled with real monsters of every stripe, then why do we entertain ourselves by inventing imaginary monsters that scare us?

Because those monsters are vanquishable.

A dragon can be defeated by a valiant knight or brave Hobbit. Vampires can be dispatched with a wooden stake through the heart, a werewolf with a silver bullet. The monsters we imagine come with weak spots because we build them in.

The real-life monsters? Not so much.

Art is one of the ways we work out our problems and face our demons. Those monsters we create are stand-ins for the real thing. In the dream-realm of fiction, we can defeat them. And maybe that gives us courage to face the real-life monsters.

In Darkness, Delight: Creatures of the Night provides just such a diversion with stories that allow us to face those monsters.

If nothing else, they will take our minds off of the real ones for a little while.

About In Darkness Delight: Creatures of the Night:

In Darkness, Delight Volume 2: Creatures of the Night is available now!

In Darkness, Delight is an original anthology series revealing the many faces of modern horror— shocking and quiet, pulp and literary, cold-hearted and heart-felt, weird tales of spiraling madness alongside full-throttle thrillers. Open these pages and unleash all-new terrors that consume from without and within.

The concept for the new horror anthology line was co-developed by executive editor Evans Light and managing editor Andrew Lennon, with assistance from Corpus Press editors (and Bad Apples series alumni) Adam Light, Jason Parent, and Gregor Xane. The eye-catching cover was created by artist Mikio Murakami, and the attractive interior layout for all editions was designed by Lori Michelle of The Author’s Alley. Publicity is being handled by Erin Sweet Al-Mehairi of Hook of a Book.

About In Darkness, Delight Volume 2: Creatures of the Night –

Clutch onto hope and pray for dawn. Creatures rule the night.

Purchase Information for Vol 2 Creatures of the Night –

RAY GARTON is the author of the classic vampire bestseller Live Girls, as well as Scissors, Sex and Violence in Hollywood, Ravenous, and dozens of other novels, novellas, tie-ins, and story collections. He has been writing in the horror and suspense genres for more than 30 years and was the recipient of the Grand Master of Horror Award in 2006.  He lives in northern California with his wife Dawn where he is at work on a new novel.