Go Forth and Sin

Here I am again, talking about John F.D. Taff. I’ve talked so much about John over the last five or six years, you’d think I would have run out of things to say by now. But, alas for you, dear reader, I still have plenty to say about this guy. But I’ll keep it to a minimum today, given that I’m going to be writing about him and another book a lot fucking more in the days and weeks to come. But right now, I want to share with you this final piece in this series of articles on the seven stories in The Seven Deadliest. That final tale will fuck you up, and that’s all I’ll say about that. Read this piece by John F.D. Taff and go buy that book, out now from Cutting Block Books.

My Gluttonous Take on Gluttony

So, when we came up with the idea for The Seven Deadliest, we thought it would be cool if we got seven really different authors to write their takes on one sin. I thought about all the sins I’d like to write something on—anger perhaps, maybe lust or avarice. Jealousy, that’d be great.

But the only way that we could see making this work was to just throw everyone’s name in a hat and have them take the sin that was randomly drawn. That’s what we did. And I got gluttony. I know…right?

Gluttony seems a ridiculously common sin, even banal in today’s super-sized, Big Gulp, endless buffet America. And let me tell you, gluttony and I go way back…at least to my 30s, where the weight really seemed to come on. So, yes, I am a sinner, at least for this particular sin. But how to write something that didn’t just devolve into someone eating enormous quantities of stuff and ending up like that guy in bed in the movie Se7en?

The only other author who I thought might have a similar problem writing about the sin he ended up with was Richard Thomas. He got lust. The poor fool. Like gluttony, that sin seems so…well, done to death. How hard it was going to be for him, I thought, terrific writer though he is, to do something with that.

Well, shit. He hit the ball into the stratosphere with his story “Ring of Fire.” You’ll see when you read it. I hadn’t written mine yet, and Richard’s story really lit a fire (excuse me) under me to produce something that didn’t read like a thousand other takes on the subject.

What I decided to do was to take this sin of—at its core—selfishness and amp it up instead of paring it back. You want a story about someone who eats a lot? Fine, I’ll double down on that, but in a way that I don’t think you’re going to expect. Leastways I hope not. And in a way that, with any luck, shows how truly expansive this particular sin can be, if taken to the utmost extreme.

Anyway, hope you like my story. I’m quite proud of it, and of all the stories in The Seven Deadliest. Each author explored their sin in unexpected and exciting ways, each completely different in style and tone. And that’s kind of the hope I had for this anthology when I pitched it to Patrick Beltran at Cutting Block Books. I think we succeeded, and I genuinely hope you think so, too, when you read it.

So, go forth and sin! You’ll be all the better for it, I swear.

Buy The Seven Deadliest from Amazon. 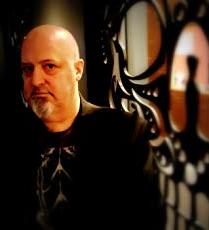 John F.D. Taff is the author of more than 100 published short stories and six novels.  His short story collection Little Deaths was named the best horror fiction collection of 2012 by HorrorTalk.  His collection of novellas, The End in All Beginning, published in 2014, was a finalist for a Bram Stoker Award® for Superior Achievement in a Fiction Collection.  His fiction has appeared most recently in Gutted: Beautiful Horror Stories, Behold: Oddities, Curiosities and Undefinable Wonders, Shadows Over Main Street 2, and his latest short story collection Little Black Spots.  His epic novel The Fearing will be out from Grey Matter Press in May 2019.  He’s also a Stoker finalist this year for his short story “A Winter’s Tale.”  Follow him on Twitter @johnfdtaff or learn more at his blog johnfdtaff.com.