We’re excited to continue our ongoing coverage of The Seven Deadliest by welcoming Kasey Lansdale to Ink Heist! Kasey is a multi-talented creative who has achieved success in just about every artistic medium you can think of. She’s an accomplished recording artist, author, editor, and actress. “The Companion – the story she co-wrote with her father and brother – is also set to be adapted for the upcoming season of Creepshow. In addition to all of that, she also started The East Texas Songwriter’s Workshop, which she still hosts. Simply put, Kasey has a superhuman work ethic and if you aren’t following her various projects already, you’re missing out. In her article, Kasey talks about the urban legend that inspired her story and also the way women are perceived and how that shaped the tone of “Cap Diamant.” Be sure to keep coming back to Ink Heist in the coming weeks as we plan to feature guest articles from the authors involved with The Seven Deadliest each week leading up to the anthology’s release.

Her story in The Seven Deadliest, coming in May from Cutting Block Books

When I was asked to contribute a story for the Seven Deadly Sins anthology, I was elated. My assigned sin was Pride. I decided to veer more in the direction of vanity, as these “sins” are sometimes presented interchangeably. As a young woman in Hollywood, I felt particularly adept at this subject. The idea itself came from a trip up the East Coast to see the changing of the leaves. Our last stop was Quebec, Canada. It was October, so all the Halloween decor was smattered across the city, as well as an urban legend of the town about a woman who tricks men into their death by having them fall in love with her. As soon as I heard it, I wanted to know the backstory. But, there wasn’t one. So I created it. It was very much a testament to the fact that in today’s society you’re old at thirty, especially women. You’re considered an “old maid” if you’re not married by 35. And don’t get me started on when people find out you’re not in a rush or even considering having children. Though we’ve come along way in equality, there’s still much to gain. Taking all these thoughts and feelings that I encounter in my daily life, I wanted to incorporate them into the story. I wanted to show how both men and women suffer from the idea of vanity, of how they think they should appear to the outside world. I hope that laced within “Cap Diamant”, people might discover a small portion of their own prejudices, against themselves and others. It’s so easy to fall into the role we are told we should inhibit, and in this case, it’s a clear presentation of how our vanity, our pride, can get the better of us. 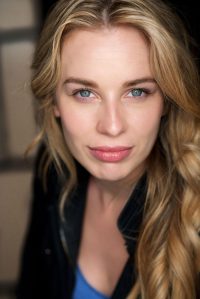 Kasey Lansdale, first published at the tender age of eight by Random House, is the author of several short stories and novellas, along with publications from Harper Collins and Titan Books, as well as the editor of assorted anthology collections, including Subterranean Press’ Impossible Monsters. She is best known as a singer/songwriter.

“As a vocalist, she walks the line between traditional and contemporary sounds throughout. She knocks out some notes that will leave you wondering ‘How did she do that?” –Billboard writer, Chuck Dauphin.

Her new collection, Terror is our Business, was lauded by Publisher’s Weekly as “storytelling that delightfully takes on a lighter and sharper edge.”

Her collaboration with her father and brother, “The Companion,” has been adapted to release in the upcoming television remake of Shudder’s, “Creepshow.” She currently resides in Los Angeles, CA.