A Dance With Deception

“No boy had ever failed an inspection.” 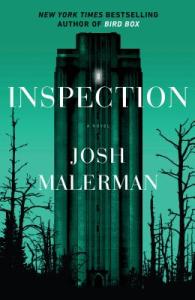 Thus begins this new Josh Malerman concoction where we meet J and the Alphabet Boys–my next band name–living in a high tower far from the rest of the world under the watchful tutelage of the Parenthood, the organization of adults run by the at first enigmatic D.A.D., the seemingly benevolent caretaker and benefactor for everyone living in the Turret. Separated at birth from parents they don’t know exist, they’ve been raised in isolation, nurtured and formed into young phenoms, geniuses. And yet, they are also kept intensely ignorant, first and foremost about the existence of the opposite sex, but also about the outside world in general.

“Hysteria, J thought. He shook his head, trying to roll the idea out of his ear. It was a word he didn’t like anywhere inside his head. As if the four syllables had the same properties as Rotts and Moldus, Vees and Placasores. The very diseases the inspectors searched him for now.”

They’ve been lied to about their origins, society as it really is, and who and what the Parenthood really is. But as they edge into puberty, the boys begin to question, J, in particular, suspecting he’s been lied to about one simple thing. And that one lie, a tiny slip on the part of D.A.D., turns out to be the thread that, once pulled, will become the unraveling of the entire Parenthood and everything they’ve set out to achieve.

Approaching a new Josh Malerman book is like doing an unboxing. Because, while you think you have some inkling–based on a theme–of what’s inside, you really don’t have a fucking clue and you’re always deliciously surprised by the contents. And new offerings from this eclectic author are always the same way. The only commonality these books share is the absolute brilliance and originality the author applies to every new project he takes on. There’s a dark yet beautiful god living in Josh’s brain, informing his imagination and feeding his words to the page with ink of black gold. In Inspection that ink is tinged with threads of deception and betrayal elevated to horrific levels and imbued with a constant sense of dread, of looming despair. And, while it is at its core a work of escapism, it exudes a recognizable vibe. The act of taking children from their parents and isolating them echoes the heinous events occurring in today’s society, enhancing the already stomach-churning feelings of apprehension infused throughout the narrative.

One of the reasons Black Mad Wheel is–or possibly, was–my favorite Malerman story is that it, up to this point, felt like the most deeply personal work the author had yet completed. But I’ve discussed his process with him at length in the past and I think this one takes his connection to the work much deeper. Warren Bratt, the Turret’s in-house author, goes into this wild frenzy of relentless creativity that sounds very much like something Josh once told me in an interview for This Is Horror. And the reaction of the boys to a book he writes, their fear and confusion and dread, and eventually awed delight, further reinforce in me the notion that the author is writing from a deep well here, that these are reactions he would hope to engender in his own readers. And I’m here to tell you of the many ways he succeeds to do just that in this new novel, and also to let you know if Black Mad Wheel is still my Malerman darling.

There are two storytelling traits that Josh Malerman excels at that make his stories always resonate with his readers. The first, the one that’s always of utmost importance in any story, is character development. Malerman’s attention to detail coupled with his ability to deliver just enough backstory has the effect of generating fantastically well-rounded, dynamic personality types who evolve and change as the story progresses. This results in some of the most believable, utterly sympathetic and lovable figures in modern genre fiction. The dialogue is pitch perfect and on-point throughout, and you come to know and care about his cast as if they were people you really know and love. I’ve never read and enjoyed a story that didn’t ride on the backs of highly successful characters, and in this case, those backs are immensely strong. Add to this the author’s uncanny alacrity with staging a set, his mental brick by brick construction of the places his tale occurs in, and you have a creation of near fucking perfection. Malerman makes an integral character of his setting, one without which the story would falter. The tall Turret, the expansive orchards, the basement. The Corner. If the human characters are the nerves, these places are the bones and muscles that make this thing walk and talk and breathe. You come to know them as if you’ve walked the halls yourself, climbed the stairs, strolled among the trees in the orchard searching for your own elusive origin. Now, a full week after I finished the book, I can still close my eyes and picture every detail the author fed me, and the ones my mind created on its own too.

In the end, it’s just a goddamn memorable story, wrought with pitch-perfect pacing, beautiful characterizations, and prose that only Josh Malerman could have penned. His is an instantly recognizable voice, and his way with a sentence is unmatched by none but possibly the great Jack Ketchum. The vocal structure is designed to control the rhythm of the story, and it does so stunningly, moving you into and through the narrative with the rapid-fire cadence of a military assault rifle. In Inspection Malerman has penned a beautiful, bleedingly human story, one born in hubris and betrayal, painted in blood, and culminating with a sense of redemption and hope. The author takes suffering and shapes it into promise, lies into truth, treachery into bloody comeuppance. And while it might not quite surpass my darling Black Mad Wheel, it’s a fucking five-star read in a lexicon of five-star reads, and what more can you ask for, really, except the next Josh Malerman book, please.

Buy Inspection from Amazon or find it on Indiebound.