The Evolution of a Nightmare

Robert Ford Talks About A Penny For Your Thoughts 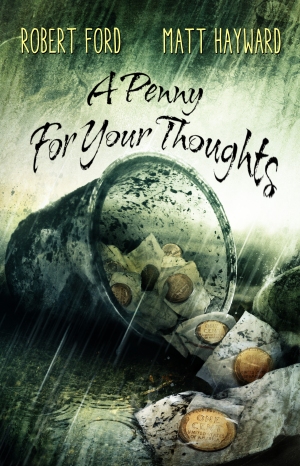 First, thanks so much to Shane and Ink Heist! A ton of hard work goes into running your site and Matt Hayward and I really apprecite you spreading the word about our new novel “A Penny For Your Thoughts” and all you do for the horror genre!

It’s been almost four years ago since I met Matt Hayward at the annual Scares that Care Convention. I had heard about Matt online but had never met in person. He and I hit it off right away, had an absolute blast at the convention, and by the end of the weekend, it was as if we had known each other for years.

We kept in touch afterward, touching base here and there as life marched onward. He was busy cranking out some projects and I was working on a novella and a bunch of other things. And then, the summer of 2018 arrived.

It had been an insanely busy year for both Matt and I. We both had new releases coming out at the Scares that Care convention that year, and it was also not long after the highly anticipated launch of the Welcome to the Show anthology. We both knew it was going to be a busy weekend so the night before the convention began, Matt and I were outside, both of us with pints in hand, relaxing before the madness kicked in the next day.

“So, Bob.” Matt took a sip of beer and grinned. “I think I have something for us to work on if you’re interested.”

And he starts spinning out the core story of what would eventually become “A Penny For Your Thoughts.” I listened to the story set-up and told him I liked it. I liked it a lot, actually. It was an interesting concept to explore and I told him as much.

When I finally went to sleep that night, I found myself thinking about the idea. And again, the next morning, even before coffee, the story crept into my thoughts. I caught up with Matt later and we were both (pardon the pun) on the same page about it.

After the convention, we got back to our respective projects at hand and after a while, I started to wonder if it was one of those conversations you have at conventions about working together and because of other commitments, it just never happens. Writers are always working on something. The most common question outside of “where do you get your ideas?” is “what’s next?”. There always has to be a ‘what’s next’ and sometimes that gets in the way of things you really want to do.

So, a couple of months went by and one day, out of the blue, I got an email from Matt and a message that he sent me an opening chapter to take a look at. I read it immediately and was absolutely floored. He had written this beautiful visual opening that is almost cinematic in its delivery, and I think I went to pour myself a fresh cup of coffee and dug into it right away.

I emailed my section to Matt and we talked about it. He suggested we combine what I had sent along with his opening and that’s what became Chapter One. We both realized we really had something unique. It just really felt like it fit in place, and as the novel progressed, I mentioned to Matt that each new chapter felt like a massive gear slipping into a much bigger piece of machinery.

Outside of the core idea we had originally talked about, Matt and I didn’t work with an outline. Maybe three or four times throughout the process, he and I had conversations about what if this or that happened, and Matt suggested this great idea about referencing an earlier work of mine, which ended up becoming a major part of the plot. I generally don’t like working with outlines because I think, at times, it can constrain the writer. I think if things are mapped out so tightly, it can prevent you from introducing a new character or plot point, and working together with Matt, this worked out so well. It was always like Christmas morning getting an email with a new chapter to find out where he went with the story and it kept things fun and loose. If it surprised us, we really think it will surprise the readers.

Collaborating with Matt was a phenomenal experience. He’s a smart guy, very fast with his wit, and has a great sense of humor. I think when you’re collaborating with someone, there has to be a healthy level of trust. I don’t know any writers at all who like to share their first draft. When I write, I tend to self-edit as I’m going along to at least put a little bit of polish on things, and I think Matt follows the same process. But you have to trust the other person because you’re allowing yourself to be vulnerable, to see that early draft and take chances and pursue things as the storyline progresses.

Matt and I took our time in developing strong characters—something we’re both very focused on—and seeing their arc during the novel was such a fun thing for both of us to experience. Even though we weren’t working with an outline, it was important for both of us to hit certain marks during the novel. We both enjoy contrast in our work and there’s definitely an element of humor to “A Penny For Your Thoughts”, but I think we both used it to heighten the darker moments that exist. It’s a very emotional novel, too. We both commented as we were going through the editing process, that certain scenes in the storyline still hit us hard even though we knew they were coming up.

While the edits were going on, Matt reached out to Ben Baldwin for the cover illustration. We both loved the work he did for Stephen King and Richard Chizmar’s novella “Gwendy’s Button Box” and when we received early cover sketches, Matt and I were blown away. I think we were giggling like school kids over the finished images Ben sent and when the cover reveal happened on social media, the response made Matt and I giggle even more. Ben nailed it and it was even better than we hoped for.

The feedback we’ve been getting from beta-readers and early reviewers has been overwhelmingly positive and we’re so excited to get “A Penny For Your Thoughts” out to everyone at the beginning of June from Poltergeist Press. It will be available in hardback, paperback, ebook, and there’s an audio book being developed as well.

Again, thanks so very much to Ink Heist and everyone who has retweeted, shared a post, or is doing a review. We couldn’t possibly be more grateful to all of you.

Pre-order A Penny For Your Thoughts

ROBERT FORD has published the novels The Compound, and No Lipstick in Avalon, the novellas Ring of Fire, The Last Firefly of Summer, Samson and Denial, Bordertown and the short story collection The God Beneath my Garden. In addition, he has several screenplays floating around in the ether of Hollywood. He can confirm the grass actually is greener on the other side, but it’s only because of the bodies buried there.

MATT HAYWARD is a Bram Stoker Award-nominated author and musician from Wicklow, Ireland. His books include Brain Dead Blues, What Do Monsters Fear?, Practitioners (with Patrick Lacey), and The Faithful. He compiled the award-winning anthology Welcome To The Show, and is currently writing a novel with Bryan Smith. Matt wrote the comic book This Is How It Ends (now a music video) for the band Walking Papers, and received a nomination for Irish Short Story of the Year from Penguin Books in 2017. He is represented by Lane Heymont of the Tobias Literary Agency and can be found on Twitter @MattHaywardIRE or at his website www.sundancecrow.com