Throwback to the Future – The Nightmare Girl

The Nightmare Girl by Jonathan Janz

was first released. The reason I’m doing this is because the book is one of my stand-out favorites when it comes to the brilliant darkness that is Jonathan Janz and it’s important to me to get it in your face. This is–to my thinking–a not as well written review as I’d like it to be. But hey, that was then and this is now and I’ve decided for the sake of honesty and transparency to leave it exactly as it was originally except for this little intro. So, all that said, I’ll get the hell out of the way and let me take over. 😉

I’ve read most, if not all, of the longer works that Jonathan Janz has produced, so it’s probably kind of obvious that I’m a fan. No, not just a fan. A HUGE fan. The reason for this is that Janz can write his ass off. In terms of talent, he’s right up there with the greats of the genre and deserving of any serious horror fan’s notice and admiration.

From the book description on Amazon: 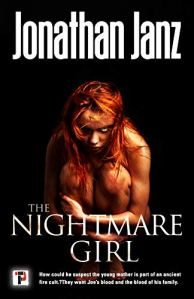 Playing with fire has never been more dangerous.

When family man Joe Crawford confronts a young mother abusing her toddler, he has no idea of the chain reaction he’s setting in motion. How could he suspect the young mother is part of an ancient fire cult, a sinister group of killers that will destroy anyone who threatens one of its members? When the little boy is placed in a foster home, the fanatics begin their mission of terror.

Soon the cult leaders will summon their deadliest hunters—and a ferocious supernatural evil—to make Joe pay for what he’s done. They want Joe’s blood and the blood of his family. And they want their child back.

Of all the Jonathan Janz novels I’ve read, there hasn’t been a bad one in the bunch and THE NIGHTMARE GIRL is no exception. It’s the tightly paced, emotional, and captivating story of Joe, a good man in a hellishly bad situation who, in spite of his flaws, fights for his family and for the child he saved from an abusive mother. What he didn’t know at the time of his intervention is that they were members of a murderous cult, comprised of vicious killers who will stop at nothing to get their child back and to make Joe and his family pay a debt of suffering and blood.

This is old school horror born in the cutting edge imagination of a virtuoso of the genre. The pacing is perfect, the theme and plot are cohesive and believable, the scares visceral and real. But the thing that really makes this book work are the characters. Janz is a master of character development and THE NIGHTMARE GIRL is a shining example of that. The characters think, speak, and act like real people, both the good and the bad, and you find yourself loving the former and fearing the latter. Jonathan seems to be intimate with the inner workings of the psyche and he pulls Joe Crawford’s emotions directly from his own heart. In real life, he talks about his family frequently on his social media feeds and you can tell that he loves them deeply. He draws heavily on that emotion here and it brings a poignancy and depth of character to Joe that caused me to feel like I knew him and to care deeply about the fate of him and his family.

If you’re looking for an intelligent, entertaining, and ultimately satisfying read, you won’t find better than Jonathan Janz, and if you haven’t read any of his books, THE NIGHTMARE GIRL is a damn good place to start. Smart money says you’ll be hunting down the rest of his books shortly after finishing this one.

About the author: Jonathan Janz is the author of several previous books, including THE SORROWS, DUST DEVILS, THE DARKEST LULLABY and EXORCIST ROAD. His newest novel, WOLF LAND will be released on November 3, 2015. You can learn more about Jonathan and his work at www.jonathanjanz.com and follow him on twitter here.