The Godfather of Constant Readers

THE GODFATHER OF CONSTANT READERS

A Constant Reader’s Reflections on the Works of Stephen King

by Chad A Clark 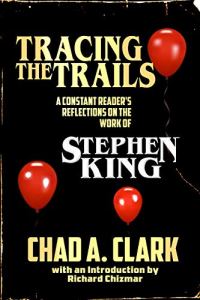 I normally read non-fiction quite slowly and I fully intended to take a very leisurely stroll through Chad Clark’s Reflections on the Works of Stephen King but once I started I could not put the thing down. In the end I read it straight through over a few days and I cannot give this brilliant work higher praise than that. At first glance a whole bunch of reviews specifically on the works of Stephen King might not sound like the most riveting topic for any casual reader, but Clark genuinely brings the subject matter to life. In essence, this is much more than a collection of reviews and is a very personal journey through the fiction of an author who has dominated the horror landscape since the 1970s.

To find out more about this vast project return to Ink Heist in a few days when we will have a very detailed interview with Chad Clark on the origins of his project which started life as a blog and he will share his thoughts on many aspects of King’s prolific output, both good and bad.

To call Clark’s Tracing the Trails a collection of reviews fails to tap into the sheer breadth and depth of his project, which is ultimately a labour of love. A more accurate description would probably be short essays which bring his novels into the context of King’s wider career. Some reflect upon where King was in his personal life, drinking, drugging or sober, and bring them into the wider context of what was happening in the book world at the time. Equally significant, which particular literary trajectory King was on when any one book was released? Crucial also, what relationship did Chad Clark have with Stephen King when he read each of these novels? Because, let’s face it, we all know he’s written some duds and readers can quickly fall in and out of love with authors if they read a couple which fail to deliver. Us readers are a fickle bunch.

Chad Clark is of the age to have read many of the 1980s era King novels when they were brand new, and the older ones easily obtainable from his local libraries. Like many of us Constant Readers (the name Stephen King gives to his biggest fans) he drifted away from his hero for a number of years, only to rediscover him, as I did, in later life. In 2013, when Chad was beginning to write his own fiction, he decided to start a blog in which he reviewed every King book in chronological order and by the end of 2017 had reviewed all his published novels. Tracing the Trails also features the novels King has published since, right up to and including the most recent 2018 novella Elevation.

The project has a beautiful flow to it and I felt the conversational, light, and unassuming tone worked absolutely perfectly. Clark does not preach and only gives him own opinion, neither does he sell himself as any kind of Stephen King expert (although he most definitely is). First and foremost, he is an exceptionally knowledgeable Constant Reader and this shines through vividly, with his love for the material overwhelming. Clark tries to find the good in even the weakest of King books and had much more patience for some of early noughties fiction than I did!

Thankfully, this is not an academic text and does not have any pretensions to be. The last heavy study I read on Stephen King bored me to tears, so well done if got to the end of America’s Dark Theologian: The Religious Imagination of Stephen King by Douglas E. Cowan, you’re a better man than I. I’m sure this academic knows his subject, but this book left me cold and should you want a deeper sense of King as a writer and as a man then read Chad Clark instead, the Cowan book will tell you nothing. Why? He nails the strengths and significance of this author in the way an academic text can never do. Ultimately in horror sometimes “a wavy curtain is just a wavy curtain” and there is no need to go down rabbit holes looking for deeper meanings in genre fiction which is genuinely not there. Thankfully Chad Clark does not do that, instead he throws us a massive amount of food for thought to chew over, in a very personal and humble odyssey into his favourite author. It’s by a fan and it’s written for fans.

It’s clear Clark knows Stephen King’s fiction inside out and back to front. He has read most of his books more than once, some several times. I’m read just about everything with the exception of some of the Dark Tower novels, so in a pissing contest Clark would beat most other Constant Readers hands down, but he is really not the type to blow his own trumpet. I also adored the many observations and anecdotes which are littered across the essays, they add genuine colour to proceedings. I’m going to outline a few below, remember you don’t have to agree, but it gives a flavour of the sort of stuff featured in Tracing the Trails, and I’m sure other Constant Readers will have their own opinions on these. We’ll return to many of these points in our interview with Chad in a few days, and even answer some of them!

Over the course of his essays Chad Clark chews over all these points and many others besides, for major Stephen King fans this will be very enlightening and nice triggers for stuff they haven’t thought about since they read the book up for discussion. He spends a lot of time joining up the dots connected to the Dark Tower books and I particularly enjoyed these, perhaps this was because I’m no expert on these books. I’m not saying I’m going to read them, but Chad sure had me thinking about them more than I did previously.

There is also a lot of excellent bonus material. If you followed the original blog the extensive short story collection sections have been completely rewritten and there are new mini reviews of every story. So, if you haven’t read everything Chad provides an excellent resource should you just fancy dipping into King’s vast collections. He does something similar with the novellas.

Further inclusions include a brief look at some of the films, a discussion on the very controversial underage sex scene in IT and reviews of all the Bachman books. There is also an enlightening introduction from Richard Chizmar (who co-wrote Gwendy’s Button Box) with King and a selection of other inclusions from other horror authors including Kit Power. In fact, the other contributions are the least essential features of the collection as they’re a diversion from Chad Clark’s voice. Once he pulls you in with his easy-going style, I didn’t fancy listening to another talking horror head.

For King fans this is essential reading and I thoroughly enjoyed a trip inside the head of another Constant Reader who has also written a few very good novels and novellas himself. This is unquestionably the best book I have read about Stephen King.