A Deviant Eloquence by Sara Tantlinger

A Deviant Eloquence: The Words of H.H. Holmes

There’s an infamous quote that is easily found on the internet and attributed to the serial killer H.H. Holmes. Perhaps you’ve read it before:

“I was born with the devil in me. I could not help the fact that I was a murderer, no more than the poet can help the inspiration to sing.” 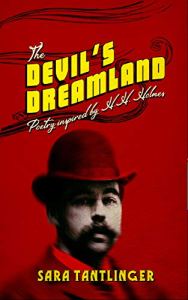 There’s a macabre beauty in these words. The quote paints an image that entices, inviting the reader to learn more. It’s too bad Holmes never wrote these words. He did, however, write a memoir and confession while in prison, but this quote never makes an appearance. It’s more likely the quote stems from the unreliable newspapers of the late 1800s that were covering the sensationalized story of the American ripper. Some claim the quote came from a cylinder recording of Holmes, but again, there is no hard evidence of this. Disproving the quote was one of the many myths vs. facts I discovered during research for my book, The Devil’s Dreamland: Poetry Inspired by H.H. Holmes. As someone drawn to the beauty of horror poetry, I first got the idea of doing a Holmes inspired collection after watching the Netflix documentary on the man a few years ago. While I never found the aforementioned quote in any credible sources, I did, however, discover Holmes’ true writings.

One of the traits that makes Holmes interesting to study was the eloquence he possessed. The seduction and charm he emitted can be seen in later criminals like Ted Bundy or Paul John Knowles, also known as “The Casanova Killer.” Holmes used words and mind games to swindle workers, businesses, and lawyers. His words were also used to seduce women into becoming his wives, his mistresses, and for many, his victims. After a career of nefarious fraud, cons, and murder, he was eventually arrested, but even that did not deter his silver-tongued ways.

While in prison, he wrote a memoir (see Holmes’ Own Story if you’re interested), which he prefaces by writing, “My sole object in this publication is to vindicate my name from the horrible aspersions cast upon it, and to appeal to a fair-minded American public for a suspension of judgment…” With the aim to gain public sympathy as opposed to being sentenced to death, Holmes crafted something unique. Something full of lies, yes, but how many serial killers write a memoir while in prison? I don’t know the numbers, but I’m guessing it’s not a lot:

“The following pages are written under peculiar circumstances, perhaps the most peculiar that ever attended the birth of a literary work” (Holmes’ Own Story). Literary indeed. Holmes’ memoir is sickeningly sweet in the idyllic life he attempts to paint when he writes, “Come with me, if you will, to a tiny, quiet New England village, nestling among the picturesquely rugged hills of New Hampshire.”

It’s difficult to know if anything holds a shred of truth. The memoir is so quiet that it’s actually boring – beautifully written prose, but nothing you’d want to read for entertainment, or perhaps you are crazy like me and read it over and over, obsessively trying to understand the madman behind the pen. Holmes was an educated man who stayed in school to become a doctor – another trait that sets him apart from many other serial killers. He wanted money, not necessarily to murder. Eventually he would learn to see murder as a way to obtain his money-lust.

What perhaps makes Holmes the most different from other killers would be his outright ambitions. He constructed the eyesore of a building that later became known as the “Murder Castle” in Chicago, tried to construct a similar building in Texas, married three wives who he kept alive, took on mistresses (most of whom he is thought to have killed), became a bit of a snake oil salesman, and a great deal more in order to rip off the public and take their money. He was clever, and he used that wit to twist his life into something meant to relate to the public within his memoir. He even quoted a poem, which I eventually found the lines were written by Ernest Delancey Pierson in the poem “Adieu!”

“I only know the sky has lost its blue / The days are weary and the night is drear.”

Perhaps even in this memoir of lies, Holmes knew his time was coming to an end. After the memoir and Holmes’ death sentence, he did pen a “Confession” around 1896, which is publicly available and where the following quotes are being taken from. I think once Holmes realized his memoir failed in granting him innocence, he decided to go out in a final blaze of glory, confessing to 27 murders even though some of the victims were in fact proven alive, thus making it more difficult to understand his state of mind. He begins the confession by writing, “During the past few months the desire has been repeatedly expressed that I make a detailed confession of all the graver crimes that have with such marvelous skill been traced out and brought home to me.” Throughout the confession, he inserts bantering taunts of law enforcement, overly praising their “marvelous skill” in what I read as a bemused sort of way. 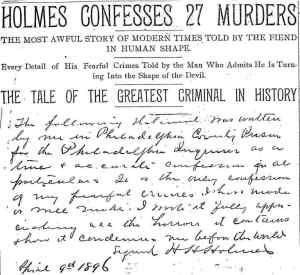 In this image showing a capture from the 1896 Philadelphia Inquirer, the newspaper writes the subtitle, “Every Detail of His Fearful Crimes Told by the Man Who Admits He Is Turning Into the Shape of the Devil.” Perhaps headlines like this spawned the quote claiming Holmes said he was born with the devil inside him. He did, however, write of the physical changes he felt within himself. After being examined, he wrote, “I have every attribute of a degenerate…” As his supposed defects increased, he listed them as “a decided prominence upon one side of my head and a corresponding diminution upon the other side; a marked deficiency of one side of my nose and of one ear…” He goes on to describe one arm becoming longer than the other, one leg shortening from knee to heel, and “a most malevolent distortion of one side of my face and one eye.” These odd descriptions inspired several of the poems in my book such as “Satanical Metamorphose” and “Metempsychosis.”

Eloquent, intelligent, and ambitious. These traits mixed with the desire to stop at nothing, not even murder, to obtain one’s wishes is a truly terrifying combination. As I wrote in my author’s note in The Devil’s Dreamland, our constant fascination with Holmes partly stems from his brilliant lies. We can read the old newspapers, testimonies, memoirs, and more, and still never understand H.H. Holmes, but it sure is interesting to try. In the end, I have to almost thank the madman for his words because they helped inspire my poetry. Maybe that’s a little perverse, or maybe it’s just the charm of the devil.