The Price You Pay by Glenn Rolfe

We’re excited to welcome horror author Glenn Rolfe to Ink Heist today to talk a little bit about his upcoming novel The Window, which will hit your reading devices and shelves on September 28th. In this guest post, Glenn talks about the inspiration behind writing The Window and some of the personal events that help shaped the story. I was lucky enough to read an early draft of this novel and I feel pretty confident in saying horror fans are really going to dig The Window. It’s a perfect blend of intense horror and a coming of age story with a unique premise. We’d like to thank Glenn again for stopping by and be sure to click the pre-order link at the end of the post!

The Price You Pay

By Glenn Rolfe
There’s a Springsteen song….there’s always a Springsteen song. When I began writing my forthcoming novel, The Window, I knew I wanted to dig a little deeper. I was just coming off from the original manuscripts for my werewolf novel, Blood and Rain, which was fun and exciting, and I was ready to write the next one.
I remember my wife bought me Bruce’s Darkness on the Edge of Town box set with the cool replica spiral notebook full of handprinted lyrics and alternate track listings for the Darkness album. The box set also contained a couple of DVDs. One is a documentary on the times and recordings between the end of the Born to Run tour and the eventual release of the Darkness album.

I knew I was ready to start my next book, but I wasn’t sure what it would be about. Watching the documentary, Bruce talked about how he loved the songs on Born to Run. They were fun and adventurous, a kid ready to break the chains of his hometown and bust loose with a girl by his side and the night and the road ahead to take them anywhere. When it came time write the next record, he’d run head first into the real world. There was money and fame, but with it came expectations. After a lengthy court fight for the rights to his music and a growing distance from the spotlight, anger, hurt, and doubt crept in. When he finally started writing the songs for the new album, they were leaner, meaner, and featured people facing real life problems. Bruce said he knew he wanted to write songs for this record that would resonate with people. People feeling these pains and anxieties that he himself was going through.

And I remember when he said that, a light bulb went off in my head. See, I was between jobs, out of my band, and sort of in my own limbo at the time. And listening to Bruce talk about these struggles and discovering his adult voice, daring to bring his feelings to the mix and into the songs for others to connect with…that seemed like kismet to me. I was in my early thirties with a wife and two kids and no job. We were struggling to get by and I was struggling to smile. I had no other way to get these oppressive, painful feelings of ineptitude out. I used to pour that kind of stuff into my songs, but I had no longer had a band. But I had written a book, and I could damn sure write another one.

I started the first chapters of The Window back in December of 2011. I finished it at the beginning of this month. Now, I didn’t work on this book for that whole time. I wrote and released numerous novels, novellas, and two short story collections before finally getting down to business and finishing this one. But it was always in the back of my mind, simmering and stewing, waiting for its time.

This book is about weaknesses. It’s about flaws and hurt and depression. But it’s also about the strength it takes to endure, to overcome, and to carry on from those powerful and oftentimes, suffocating feelings and moments in our lives. I dealt with a number of issues my characters go through in this book. I felt many of those same anxieties and failures when I started the original manuscript in 2011 and have been through many more since. And in taking all this time to complete this novel, I feel it became the book I always envisioned it would be. It has some very adult themes while also containing a coming of age tale, as well. My original thought when I’d finished the first ten chapters or so was that I wanted it to be a sort John Everson sex and blood story meets Stand By Me. I wanted to dig deep and split myself open – flaws and all – for everyone to see, for better or worse. I wanted the final story to resonate with readers, give them things that they could pick out and say, “I feel that too,” or “I’ve been there before.” Of course, I took the liberty to add in some nasty deal making demons, some blood, and some downright spooky moments. Now, it didn’t quite turn out like a King or Everson story, instead I ended up with a new Glenn Rolfe novel. At the end of the day, I hope that’s good enough.

There’s a Bruce Springsteen song called “The Price you Pay,” where he sings the lines: “Where the dark of night holds back the light of the day. And you’ve gotta stand and fight for the price you pay. No, you can’t walk away from the price you pay.”

I hope you guys will check out my new novel, The Window coming out in eBook on September 28th. You can pre-order your copy today here: http://mybook.to/TheWindow 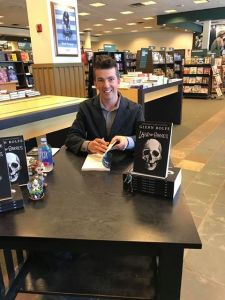 Glenn Rolfe is an author, singer, songwriter and all around fun loving guy from the haunted woods of New England. He has studied Creative Writing at Southern New Hampshire University, and continues his education in the world of horror by devouring the novels of Stephen King, Ronald Malfi, and Richard Laymon. He and his wife, Meghan, have three children, Ruby, Ramona, and Axl. He is grateful to be loved despite his weirdness.