Today Shane and I are excited to reveal the cover for the highly anticipated collaboration between Adam Howe and James Newman, Scapegoat! Both of these writers are incredibly talented and when I heard they were teaming up to write a horror novel, it became an instant “must read”. Besides, how can you go wrong when you mix metal, cults, and horror? Below you can check out the cover and read the synopsis. Scapegoat will be available for pre-order September 27th and will be officially released October 5th through Honey Badger Press.

From Adam Howe, winner of Stephen King’s On Writing contest, and the writer of Die Dog or Eat the Hatchet… & James Newman, acclaimed author of Odd Man Out and Animosity 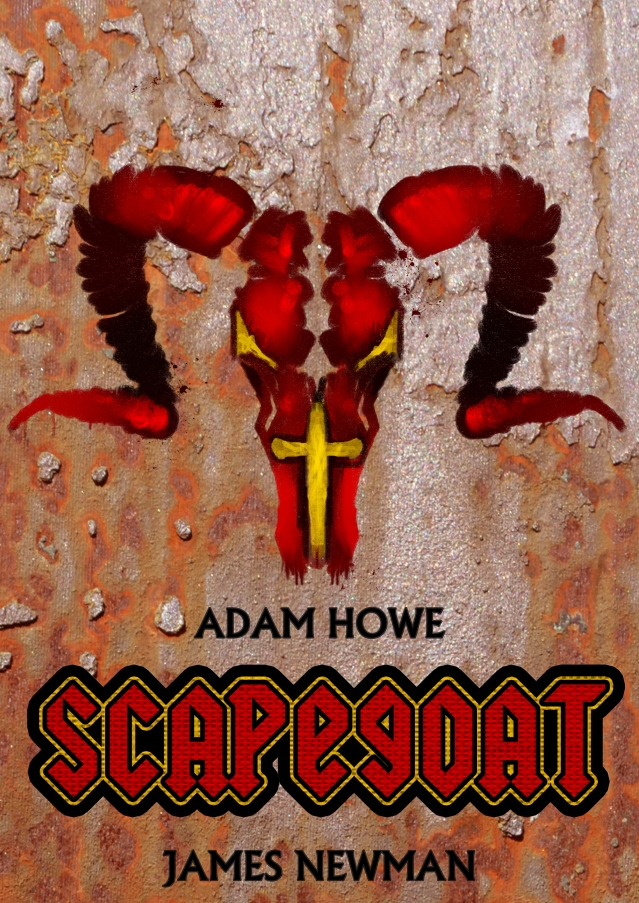 For metalheads Mike Rawson, Lonnie Deveroux, and Pork Chop, an RV road trip to Wrestlemania III becomes a one-way ticket to hell.  While delivering an illegal shipment of counterfeit wrestling merchandise, an ill-fated shortcut through the Kentucky backwoods leads them to a teenaged girl carved head to toe in arcane symbols. Soon our unlikely heroes are being hunted through the boonies by a cult of religious crazies who make the Westboro Baptists look like choirboys… a cult that will stop at nothing to get the girl back and complete a ritual that has held an ancient evil at bay for centuries…

“A delightful backwoods detour through the three Rs of southern-fried horror: Rednecks, Revenge, and Wrestlemania! Howe and Newman pack in plenty of scares and wit, and cultists and carnage to spare, perfectly blending violence and humor in equally twisted measure. SCAPEGOAT is one of 2018’s most entertaining reads, chugging along with the speed and verve of Bandit’s Trans Am and fuelled by pure joy. This is one goat you’ll definitely want to get!” – Michael Patrick Hicks  (Broken Shells; Mass Hysteria)

“Rendered in a uniquely hip style, at a breakneck pace, SCAPEGOATis packed with wildly imaginative events, humor both light and dark, and characters so vividly drawn they seem to materialize before your eyes. A bold romp. Refreshing and, above all, fun.” – Sean Costello  (Finders Keepers; Squall)

“This may be a tag-team effort between Adam Howe (whose work I know well) and James Newman (who I’m getting to know) but SCAPEGOAT moves so briskly through the gears of action, suspense, and horror that I felt more like I was watching a movie rather than reading a book. Indeed, Howe’s M.O. of making his own highly original fiction influenced heavily by American pop culture (from AC/DC to THE GOONIES) means that SCAPEGOAT is both a much-needed breath of fresh air, and a welcome blast of nostalgia. Just beware: It’s a shotgun blast.” –Joseph Hirsch (My Tired Shadow)