We thought we’d share another seven of our favorite reads with you, this time featuring novels and novellas with a thread of organization running through them. Organized crime, that is. With mobsters, drug dealers, cartels, and gangsters galore, there’s something we really love about this type of fiction and, given the selection, we think you will too. So, let us just drop a quick disclaimer here, and then we’ll get on to this list of must read books running the gamut from crime to horror and all points in between. The disclaimer: we are aware that this is pretty much a sausage fest and would like to point out that isn’t intentional. We love women authors as much as any other and would never seek to exclude or denigrate their work. This list merely reflects the favorites we’ve read in genre fiction that fit the theme we’re embracing here today. We hope you dig it. 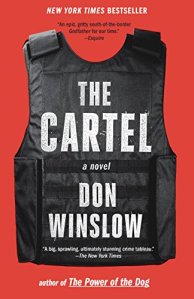 The Cartel by Don Winslow

I went into this read knowing nothing about the author or his works, not even that this book was in fact a sequel to another book called The Power of the Dog. Fortunately for me, that did nothing to detract from this amazing, epic story of one man’s descent into the hell of the Mexican drug wars, serving instead to leave me delighted knowing there was more to come from this amazing talent. Don Winslow is a powerhouse author writing at the top of the crime fiction heap and this book was a revelation to me, that discovery being that I had found a new and prolific favorite author, but also serving up the secondary revelation of a new sub-genre of crime fiction that I had not previously delved into. Cartel fiction is a thing, kids, a great one, and if you read only one sampling of it in your lifetime, this is the one it should be.

BUY THE CARTEL BY DON WINSLOW

Tony Knighton’s Three Hours Past Midnight is an underrated noir novel that any fan of the genre needs in their collection. The novel follows an unnamed narrator who is an outsider in criminal circles after they all blame him for the death of his partner on his last job. Desperate to get back in the game, he teams up with an old friend for one last job – to steal the safe of a wealthy and connected Philadelphia politician. However, when that job goes sideways, the narrator realizes someone is out for him and he must go on a one man rampage in a quest for answers.

Knighton takes readers on an action-filled tour of the criminal underbelly of Philadelphia in his gritty debut. While organized crime is often portrayed as glamorous with stacks of cash, expensive cars and wild parties, Knighton’s Three Hours Past Midnight largely focuses on street-level criminals and the dangers of operating in that world. There’s not a dull moment to be found throughout the novel and Knighton is sure to be one of your new favorite crime authors once you get your hands on a copy of this.

Here’s a book that rocketed out of left field and knocked us cold just this year. Alan Baxter’s brilliant noir horror novel from Grey Matter Press has everything from femmes fatale, gangsters, guns, ghosts, and one ragingly angry father on a quest for bloody vengeance against the crime boss who took everything from him except his desire to exact a blood-debt of epic proportions. And exact it he does in this quick, electrifying read that feels like a novella in your hand and a behemoth of a summer blockbuster in your brain. Manifest Recall is the first Baxter I’ve experienced but not the first Grey Matter Press by any means. They have a reputation for publishing only best, most top-shelf genre fiction in the industry and you’ll be hearing a lot more about them here on Ink Heist in the remaining months of the year and on into 2019. They are one of our standout favorites in the publishing industry and Manifest Recall is a prime example of why that’s so.

It would be hard to draw a favorite here or to list a standout on list such as this which is by it’s very nature comprised of standouts, but if there were one that was more in the running mutually between Rich and I than just about any other title on this list, or this year, for that matter, it’s this one. Blood Standard, the incredible breakout crime novel from horror author Laird Barron, is the first straight-up crime novel he’s penned but take it as gospel when I tell you that neither one of us would be super disappointed if all he ever produced from now on was Isaiah Coleridge crime novels. No other author of dark genre fiction so fully embodies the term “consummate storyteller” as does Barron and, like everything else he does, he’s taken this Appalachian gangster noir tale of a mob fixer’s exodus out of Alaska to upstate New York and made it fully his own creation. You think you’ve read noir, you think you’ve read brutal violence and heart-breaking loss? You think you’ve experienced the most intelligent, well rounded, amoral protagonist the genre has to offer? Not until you’ve read Laird Barron’s Blood Standard, you haven’t.

When I first discovered the work of Gabino Iglesias, via this dark as fuck, magical, brutal, beautiful novel right here, I was still wet around the ears as a reviewer and, really, as a read too. I went into this book knowing nothing about it’s author, it’s premise, it’s structure, or the primary genre that laid it’s foundations. Which is not to say I had never read any noir, crime, or other works featuring desperate motherfuckers doing desperate things, merely that I had never read what happens when it’s done exactly right, when it riffs along with perfect pacing, hitting every note in it’s sweet spot and carrying a tone so achingly dark, gorgeous, and moving as is the spirit of the brilliant, kind-hearted warrior-poet who penned it. Iglesias writes with the voice of the outcast, the societal detritus cast off by the bulk coarse society and left to fend for itself in the shark infested waters of the drug and blood-soaked territories of La Frontera. Drawing on language, lore, and background from multiple cultures and telling his story with a glorious and magical blend of English, Spanish, and even a little Russian thrown into the mix, Zero Saints stands as one of the most brutally fucking real stories I’ve ever read and the one I’ve read more times than any other on this list. Give it a go, you’re certain to see why.

I’ll never forget the first time I read Richard Thomas’ Disintegration. It was the first novel I read when I started to get serious about exploring neo-noir fiction and after I finished, I was floored by Thomas’ talent and knew that I needed more. Disintegration tells the story of an unnamed narrator whose life is in shambles. He lives in a spartan apartment, unsure of what day it is and dependent on a steady diet of pills and booze to help try to erase the despair that consumes him. His sole mission in life, the only thing that gets him outside of his apartment, is the jobs he receives from a mysterious Russian gangster known only as Vlad. He gives him jobs by simply sliding an envelope under his door. He is a hit-man of sorts, but his jobs range from beating the hell out of pedophiles to a man he catches beating his dog in public. The narrator takes these jobs as an escape from the memories that haunt him deliver the justice he was denied.

Thomas’ writing possesses a gritty yet poetic quality and while the novel is full of darkness, despair and violence, you can’t help but be entranced by the dark beauty of his words. Disintegration’s combination of nuanced characters, a mind-bending mystery and breakneck pacing make this an essential read for neo-noir fans. I put this one right near at the top of my list for favorite novels when it came back in 2015, but I’ll take it one step further and put it as one of my favorites in the genre. This book has it all and will leave you breathless by the time you reach the final page. If you haven’t read any of Thomas’ work before, this is the perfect place to start. If you’re a fan of neo-noir, crime or pretty much any related sub-genre, you’re going to LOVE this book. You have my word.

There is so much to be lauded here I don’t know really where to even begin. The 54 year old author’s debut novel of Appalachian noir coupled with the alternating call and response storyline of cartel brutality was such a masterful gut-punch of emotion and humanity, reveling as it does in the majestic spirituality of nature and the mountains and dwelling in the dark personal space of one man’s tortured psyche as he tries to put the past behind him and find a place to belong in the world. Not since author David Joy burst on the scene with Where All Light Tends To Go have I been so excited by a new voice in genre fiction as I am with McLauglin’s. Bearskin breaks all the molds in the rendering of a canvas of violence, retribution, and ultimately redemption as we follow the utterly broken but determined Rice Moore on a one-man hunt for the poachers who are killing and mutilating bears on the preserve that has become both his refuge and charge. If you were to ask me right now what the breakout novel of the year would be, this one would have no contenders.