Signals from the Abyss #2 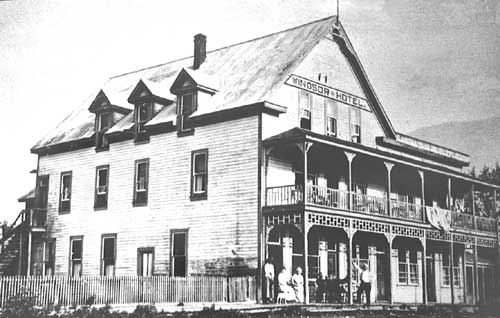 Hello, I am indie author Steve Stred, and this is my personal paranormal/ghost experience.

I have been together with my wife, Amanda for many years now. This is year 20 in fact. When we started dating in high school, her Dad used to bug her about her seeing dead people, much like the kid from Sixth Sense.

During one particular family get together, I was told the story of how my wife was friends with a ghost.

We grew up in Nakusp, BC Canada, which is a very small town. I actually lived 30 minutes outside of town in Burton, but attended High School in Nakusp, which is where we met.

When she first moved to BC from Alberta, she would spend time in Trout Lake, located near the Galena Bay Ferry, heading towards Revelstoke.

In Trout Lake, there is a hotel called the Windsor hotel, which is now over 100 years old.

The original owner Alice Jowett, purchased it in 1907 and lived well into her 90’s. In 1946, at the age of 93, she sold the hotel. Some say after she passed away, that she returned to live in her former residence.

My wife’s grandparents and mother worked at the hotel for a few years. They all lived in the hotel, and my wife and her mom lived in a room on the third floor. My wife 6 at this time.

The hotel was known to have some “ghostly” activity, but my wife was the only one who played with Alice and could see her. Alice would set off the fire alarms when certain people would come by, as well as she would turn the lights on over top of the stairs. Many days they discovered Amanda playing and singing with Alice. When they would ask her who she was playing with, she replied that she was playing with her friend Alice.

The hotel was Amanda’s playground while she lived there, and Amanda’s Mom said they believed Alice was watching her and making sure she was safe.

Years later, in Nakusp, they moved houses. They ended up renting a house that had an upstairs and a downstairs. When I would come over, I would typically sleep in the basement. At the beginning I would sleep in a smaller room in the basement, but it always creeped me out.

Amanda said she could feel the presence of John and Peggy, the former owners, in the house.

I would always sleep with the door closed, and sometimes would keep a small light on.

One night I was sleeping in the basement room, when the door opened. An older lady came in, smiled and me and then said; “I’m sorry, I didn’t know you were sleeping.” She then closed the door and left.

The next day, Amanda asked me if Peggy had visited me, because she felt her presence a lot before I went to sleep.

I don’t know if ghosts exist, if you ask my wife, she will tell you they do. That was without a doubt one of the strangest, freakiest moments of my life.

Tagged as: Guest Post, Horror, Signals From The Abyss