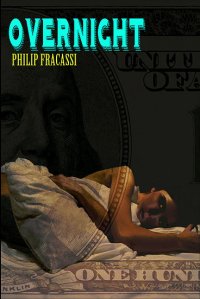 My partner in crime Shane Keene has long championed the excellence of Philip Fracassi’s fiction and he has yet to steer me wrong with any of his recommendations. So, when we received a copy of his recently released novella Overnight from Unnerving, I jumped at the chance to review it. It seemed like the perfect entry point to Fracassi’s work. Overnight is a quick-hitting story that can be read in one sitting and utilizes Fracassi’s experience working in the film industry to create a believable and authentic setting.

Fracassi opens Overnight with a short but effective description of the movie set where a bulk of the story takes place and it sets the tone for this story. “Dead. No Lights. No warmth. A charcoal-colored sky, moonless and dense. The whole night was dead.” This is what Pete sees on one of his night shifts as the security guard for a movie set. While the set has numerous day guards during the day, by the time Pete’s shift begins, he is alone in the dark and barely able to see anything in front of him. Not only does it create a sense of isolation that influences Pete, it also adds an undercurrent of malice to the events that unfold throughout the story.

Pete works the night shift and even though the night makes it a bit more uncomfortable – especially with the damp, chilly weather – Pete actually prefers the solitude. While many of his co-workers crave working the day shift for the chance to feel important and rub elbows with the crew and stars, Pete has no illusions about his place in the Hollywood pecking order. He no desire to try to reach for a small scrap of fame. He makes his nightly rounds and knows he is nothing more than a paid watchdog for a bunch of things no one would ever want to steal. He’s content with the mundane nature of his job, the stillness of the night and a steady pay check.

Despite the uneventful nature of the job, they are not permitted to sit in their cars because one of the old night guards Tommy had busted sleeping in his car while on duty. They are expected to be alert and constantly patrolling the set, with no exceptions. Pete has followed the rules throughout his six years on the job, but when he finally contemplates breaking them, he is startled by an unexpected voice coming from the darkness. He sees a man standing only a few feet away and begins to think it’s odd that the man didn’t make the slightest noise as he approached the set. The man is wearing a large white hoodie and camouflaged pants. He appears normal enough, but his unexpected arrival and the seclusion of the film set puts Pete on edge. He is miles from help and anyone who could witness the potential violence this man could unleash. The man insists he was just out for a walk and that he lived in the neighborhood, but Pete doesn’t fully buy his story. As the two men begin to talk, the stranger makes a proposition to Pete. Pete has a hard time refusing as he thinks of all the debt he owes and the things he needs to provide for his family. Despite his better judgement, he decides to accept the stranger’s offer. That decision starts a chain of events that makes Pete question his morality and threatens to destroy the life he’s so carefully built.

There were a lot of things that I loved about Overnight, but the thing that stands out the most is Fracassi’s talent at creating tension. The best example of this is the first time Pete meets the creepy stranger that wanders onto the closed set. He seems fairly non-threatening, but it’s his unexpected presence that sets both Pete and the reader on edge. Is something supernatural going on? Who is this guy? Is he just a harmless passerby or a complete lunatic? Even as the two characters start to have a normal conversation, the scene crackles with tension. In this moment where Pete begins sizing up this intruder and thinking of a possible course of action, we get some insight into what sort of man Pete is. Originally he seems like just an average working man with nothing out of the ordinary in his past. But Fracassi slowly reveals to the reader – quite effectively – that Pete has had to fight a lot in his life and has a dark past. However, his girlfriend Noemi helped him change and leave all of that behind, though he still struggles with that part of himself.

As far as characters go, the story is largely centered around Pete and his interactions with the stranger, who we later find out is named Jimmy. Fracassi does an excellent job with Pete’s character, making him seem ordinary at first and then slowly revealing snippets from his past to make him a more dynamic character. Even though we don’t know much about Jimmy, I still liked his character. Fracassi is able to capture Jimmy’s weirdness perfectly and each time he appears in a scene, you’re waiting for him to do something totally unexpected. I found it interesting that with each interaction between Jimmy and Pete, they both seem to undergo changes. Fracassi documents these changes subtly throughout Overnight, but Pete’s transformation is more internal while Jimmy’s is physical. At one point Jimmy looks like a man coming unhinged. His hair hangs limply and his beard is greasy and unkempt, a stark contrast to his “average” appearance earlier in the story. I also liked the inclusion of Holly Pages, one of the stars on Pete’s set who feels entitled to everything. Holly Pages is a fully realized character, but she represents the worst of Hollywood stereotypes. Fracassi utilizes a lot of that in his depiction of Holly Pages and it sort of represents the star culture we are obsessed with as a society.

I also thought Overnight had a great depiction of Hollywood greed and excess. There are no heaters for Pete to use on these chilly nights because they were cut to fill other areas of the budget such as paying a bunch of crew just for when a star took a nap. There is also another scene where Pete recalls stars driving off a film set because a PA had gotten them the wrong stuff. They act entitled and Pete knows that people put up with it solely because they are the reason everyone has jobs, so they don’t want to upset the status quo. Whether or not this stuff actually occurs on sets, I’m not really qualified to say. However, I do think it helps readers envision the setting because that’s at least how most people perceive Hollywood operates.

Overnight also explores some interesting ideas. As I mentioned earlier, Pete is a man who is struggling to make ends meet that slowly loses his morals and justifies his actions along the way. While it’s understandable for readers to think Pete is crazy for making such a poor choice, it does provide an interesting insight into what people may be willing to do if they feel they’ve hit rock bottom. I also liked how Pete’s one small decision leads to a slippery slope where both he and Jimmy begin to get greedier and are willing to compromise even more of their selves to get what they want.

Overnight is a stellar book that largely focuses on real-world horror, but Fracassi has a few tricks up his sleeve that morphs it from a straight-forward story into something a bit more surreal. I don’t want to touch on that aspect too much and risk ruining the story, but it was a nice twist that I didn’t anticipate. If I have one complaint with Overnight, it would be with the ending. It wasn’t bad and didn’t impact my enjoyment of the story, but it did feel kind of abrupt. But that is a very minor issue with an otherwise gripping read that I devoured in one sitting. I’m definitely all in on Fracassi’s fiction and I look forward to checking out soon, particularly Shiloh. If you haven’t read any of Fracassi’s work before, consider picking up one of his titles. He’s an immensely talented writer and I have a feeling we’ll be hearing a lot more about him in the future!