Of House Gods and Aphrodisiacs

All Hail the House Gods by Andrew J. Stone 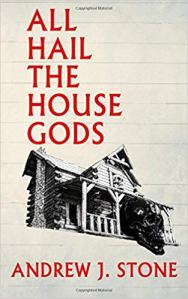 In this edition of “What the Hell Did I Just Read” I take on the sophomore work of a young artist who I firmly believe is a major up and comer in the field of subversive bizarro literature. It was not too long ago, mere months, that I discovered the bizarre, surreal, nightmarish magic that is Andrew J. Stone. His novella The Mortuary Monster literally altered my opinion–previously mostly negative–about bizarro horror fiction and my attitude toward it and toward this author in particular is further cemented by his most recent novella, All Hail the House Gods. A product of his times, and of the strange environment we find ourselves living in these days, Stone takes on some heavy subjects involving a frighteningly believable dystopian fascist society, one whose citizens choose the comfort and safety of conformity over the importance and responsibility of choice. This is to my thinking the most significant of all the myriad sub-plots he’s chosen to embrace in this second effort from Strangehouse Books and it is in its way quite similar to the theme he took on in his first outing, depicting characters foundering in an unacceptable situation they either have no control of or have turned a blind eye to.

“I opened my mouth and silence slipped out. I didn’t know what to make of Devin’s proclamations. His words certainly carried some weight, but why would those in the Coupling Caucus, why would the Mayor, continuously fulfill their role if they didn’t believe it? It’s obvious why the regular residents would serve their routine. Dissent carries severe consequences. But who could enforce punishment for dissent on the Mayor? Could comfort and fear truly be the sole sources keeping our city afloat? Can it be at all possible that the Coupling Caucus neither actively believes in their purpose nor has an ulterior motive?”

Like it’s predecessor, All Hail the House Gods delves into the complexities and pitfalls of family politics, this time digging deeper into interpersonal dynamics and branching out to include societal foibles and failings. Stone presents us with a psilocybin fueled fever dream of Lynchian proportions, delving deep into the inner workings of his main characters and painting them with deft strokes of technicolor luminosity, letting us slowly, steadily come to know and care about them through the narrative lens of naive conformity we encounter in the somewhat imbecilic and not entirely likeable protagonist. Kurt adheres almost religiously to what he views as his civic duty, living on a steady diet of aphrodisiacs and coupling with his wife Katie regularly in the effort to produce the minimum required single offspring per year for the sacrificial edification of their overlords, the evil sentient house gods who conquered humanity five centuries earlier. But when their son is chosen by lottery to be eaten in the regular ritual sacrifice, Katie rebels, forming the Collateral Damage Cooperative and vowing to thwart the Coupling Caucus and the house gods in every possible way.

All Hail the House Gods is exciting to me on many levels, not least of which is the incredibly unique, utterly original premise that could only be born in the depths of a beautiful imagination, but most notable of which is that, where his freshman effort, The Mortuary Monster, was a really great read, this book demonstrates a marked improvement on the authors confidence and talents, showing him to be a scholarly practitioner and ardent student of the Art that is the English language. So let me wrap this up with an admonition or two. If you shy away from bizarro horror fiction, and make no mistake, this is pure horror fiction, it’s understandable. Straightforward bizarro, in its absurdity and sometimes outlandish premises is not for everyone. But Andrew J. Stone is not your average bizarro author, endeavouring to gross you out and make you repeatedly bellow, “What the hell..” He’s an artist in the true sense of the word, dedicated to his form and striving with every outing to improve his skills and produce the best work he’s written to date. Mark my words. Stone is a superior talent in his field and with All Hail the House Gods he shows himself to be a rising star and an author every true horror fan should have on their radar. If you read only one so-called bizarro story this year, or even in your lifetime, make it a book by this brilliant young creator. Make it this one.

PURCHASE ALL HAIL THE HOUSE GODS