The Women We Should Be Writing – by Renee Miller

The Women We Should Be Writing 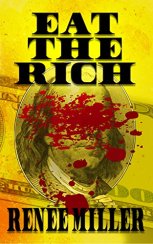 Until I focused on writing speculative fiction, I never thought about my gender. Never identified myself as a “female” writer. I didn’t consider myself a “minority” or as “marginalized.” I was just a writer, same as everyone else. Now these labels creep into everything I do and they sometimes affect my writing. It’s kind of annoying, to be honest, to feel guilty about writing stories that don’t feature women as anything but strong, fierce forces to be reckoned with. But why should I feel guilty?

We’re at a strange and awesome place right now. Women are standing together. We’re demanding to be respected. To be equal. To be heard. This is awesome. The strange part is that some of us seem to be terrified of portraying women in fiction as anything but a positive, indomitable force that succeeds no matter what the cost. It’s as though we’re afraid to show our vulnerabilities, because it might take away from the ground we’ve fought so hard to gain.

I can’t get on the bandwagon that demands I leave a final girl in my story simply because I’m a girl. I now know some readers think because I’m a woman, I should try to make sure women feature strongly and in a positive way in my stories. No victims. No sex objects. No woman who does anything except be awesome and survive. I’m not writing about superheroes. If I’m writing female characters, I want to create women that other women can relate to. They either are her, or they know someone who is like her. To do this, I have to show everything, even the unpleasant realities that are part of being a woman.

I agree that female characters have gotten a shit deal in the past. We were the arm candy, the injection of sex, or the foil that made a male character more interesting, stronger, more heroic. We were one-dimensional. Pathetic damsels in distress. The victim who relies on a man to save her, make her life have meaning, etc. These characters can serve a purpose, but they’re not what women want to read about.

We also don’t want to read about women who show little emotion, are supernaturally strong, and kick ass even when, logically, it makes no sense for them to do so. These characters aren’t empowering. They’re patronizing and ridiculous.

Women are sometimes victims, but that doesn’t make us powerless.

And why are we so afraid to portray women as victims anyway? Being victimized doesn’t mean we aren’t powerful. It’s a reflection of reality, and horror (to me) is about showing the dark truths we’re afraid to face in the real world. Women have been victimized by men since the dawn of time. These days, the majority of men I meet are all about empowering women. However, there are still Neanderthals out there who’d love to see us put in our place. There are abusive, ignorant, and violent men who hate women and everything we represent. You can show this. You can allow your female characters to know it. Hell, you can let them be defeated by this knowledge for a little while. Vulnerability is human, whether you’re a man or a woman. Women rise above this shit EVERY DAY. How we overcome it is what makes us strong and fierce. Women aren’t weak just because we’d lose a wrestling match with most men. We have other ways of dominating our opponents, be they male or female. Be creative. Show the amazing ways women have persevered and survived despite being the “weaker sex.”

Female characters should reflect the women reading about them. We are feminine, and that’s okay. When did it become a bad thing, by the way? When did wanting to wear a pretty dress, worrying over the damage to the nails you paid a hefty price to make nice, wearing makeup or perfume or killer shoes become offensive? When did wanting kids or dreaming about meeting the person of your dreams turn into something negative? Women think about these things. We do these things. We want these things. It’s okay to depict a female character doing the same. It doesn’t make her weak or pathetic. It makes her human. It gives her more than one dimension. It’s also okay to depict a woman who doesn’t enjoy any of the above. However, that doesn’t mean she has to be masculine. She can still be feminine without being interested in stereotypical “girl” things.

I guess my point is not every story gets a final girl or a badass, and we shouldn’t feel obligated to force one into our stories just because we have a vagina. So, ladies, when you’re reading a horror story written by a woman, stop demanding she conform to yet another gender-based expectation. We don’t have to avoid reality to keep our vagina cards. We don’t have to oppress the men so that our female characters can rise to the top. Strong female characters have sex. They fall in love. They are victimized. They sometimes die. Some are weak. Some are strong. Some don’t make it to the end, but that doesn’t mean they can’t leave a mark on the reader.

Speculative fiction, particularly horror, needs more real women. Good and bad. Weak and strong. That’s who we should be writing. We’re not limited to some two-dimensional piece of arm candy OR an over-inflated version who can do no wrong and who can have no wrong done to them. There are millions of women in this world, and each is unique and fascinating in her own right. Our options are literally limitless.

Click here to visit Renee Miller’s Amazon Author Page and make sure you snag some of her books!

About Renee Miller: Renee Miller is a Canadian author from Tweed, Ontario. She writes in multiple genres, but prefers horror, comedy, and erotica (sometimes all at once), and has published independently and with publications such as Unnerving Magazine, Blood in the Rain 3, Broadswords and Blasters, Deadman’s Tome, DarkFuse Magazine, and Hindered Souls Press.