One of our favorite things here at Ink Heist is well written dark crime, especially that which is penned with literary voice and flavorings of neo-noir. And summertime seems a perfectly well-suited season of the year to sit down with a good dark read (or five) that explores the grungy underbelly of modern society. The moderate temperatures and weather conditions of spring are giving way to the heat, the sidewalks radiating mirages like false oases in a concrete desert and crime, in mine and every other major city in the western hemisphere, is on the rise as tempers seethe and desperados become even more desperate in the volatile sun that rages in the dirty smog of urban wastelands everywhere. So here, without further ado, are five brilliant and exemplary crime novels you nerds should be stuffing in your brainholes this summer. Keeping in mind that Rich Duncan and I are both major horror fanatics, there are a few books here that contain elements of darkness not commonly found in typical crime fiction but they are all still seething with delicious criminality and packed with some of the most wonderful unreliable narrators and strong female characters to come along in decades.

What needs to be said about this novel? With She Rides Shotgun, Jordan Harper penned the breakout crime novel of 2017, knocking all crime novels well off the top of my favorites list, and indeed, all novels in any other genre. Polly and the Bear will suck your heart out through the corners of your eyes in rivers of saltwater, sometimes born of laughter and sometimes of heartbreak and you’ll love every fucking second of it. When Polly’s father Nate is released from prison, he finds himself marked for extermination by a gang called Aryan Steel. They’ve already killed his ex-wife and now they’re gunning for him and his daughter. But they’ve picked the wrong family to fuck with. Nate is a fighter and a survivor and, as it turns out, the apple doesn’t fall far from the tree and Polly is about the toughest eleven year-old you’re ever likely to encounter in a work of adult literary noir.

There is no description worthy of conveying to you my breathless adoration of Puerto Rican author Gabino Iglesias’ debut crime novel, Zero Saints, a darkly beautiful, terrifying story of an embattled drug dealer at odds with a terrifying gangster, it’s a poetic, linguistically gorgeous tale told with a mixture of English and Spanish that pissed some triggered crackers and idiots off but made the smart ones among us Iglesias fans for life. Iglesias’ love of language, both English and Spanglish, shines through in every word and is the high point in a short novel full of high points. When Fernando, a drug dealer and illegal immigrant, is kidnapped and taken to an abandoned house, he finds himself the only audience to a one-night only showing of his friend getting his head sawed off by a vicious gangster who wants to take over the territory. But Fernando, like the aforementioned Polly and Nate, is nobody’s dupe and, with the help of a Santeria princess and a Russian hitman (can you say Russlish?) he sets out to turn the table on the terrifying villain. A combination of literary brilliance and dark noir with more than a splash of seething horror make for one of the best works of crime fiction I’ve read in ages.

I’m reading this book right now and am only about halfway through, but it’s an easy recommendation for me. It’s a hard-boiled, noir-steeped mystery that can stand on it’s own among giants such as the great Jim Thompson or more contemporary authors such as Hank Early and Joe Clifford. Barron’s protagonist, Isaiah Coleridge, is a mob enforcer who’s been exiled from Alaska to a rural farm in upstate New York. Living a quiet life and thinking he’s left the violence behind him, he’s yanked back into the fray when a teenage girl goes missing. Laird is no stranger to noir. His horror stories, particularly the Jessica Mace ones, rest firmly on it’s gritty foundation and you can tell that the author has spent a lot of time reading within the subgenre and he’s mastered it’s techniques and forms admirably. Couple this with the fact that he knows his locations and settings intimately and paints them vividly and with obvious passion and you have a crime novel that will likely land easily on the top of my 2018 favorite reads list.

I haven’t read a ton of crime fiction by women, something I most definitely need to fix, but if you asked me to name the toughest, meanest book in this article, this one is an easy winner. Author Christa Faust is an unflinchingly honest crime fiction author with some of the biggest literary cajones on the block and her protagonist here and in Choke Hold is possibly the strongest female lead I’ve read anywhere. Angel Dare is a former porn star with a bawdy personality and a bad attitude. After she’s shot and left for dead in the trunk of a car she’s determined to discover exactly what’s been done to her, and she’s willing to extract a heavy price in blood in exchange for the answers she needs. Riffing heavy on traditional themes, this is one of the most gritty crime novels I’ve read and one that I’ve returned to at least three times since the first pass. If you’re a crime aficionado, this is a must read. 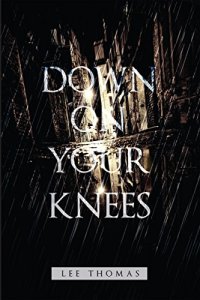 Down on Your Knees – Lee Thomas

Upon his release from prison, Denny “The Bull” Doyle discovers low-level gangster Malcolm Lynch has unseated him from his place atop his “organization” and his associates are being murdered in vicious and unsettling ways. And now his lunatic brother Jordie is in the killer’s sights and Doyle will stop at nothing to protect him and destroy the evil and greedy sorcerer kingpin. With dark underpinnings of noir and traditional crime flair, Down on Your Knees was one of the most surprising and satisfying reads I experienced in the past year. Combining literary voice with neo-noir and magic realism, Lee Thomas shows himself to be one of the brightest, most unique, and most talented individuals to take up pen in the field of dark speculative fiction. And I was delighted to discover that he has a wide body of work available for public consumption. You can bet your asses I’ll be consuming every single word of it, and you should too.

Buy Down on Your Knees