IT’S MY DEATH AND I’LL WRITE IF I WANT TO by John C. Foster 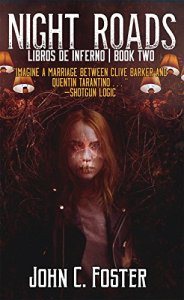 Today we have author John C. Foster with us, writing about his book NIGHT ROADS, the sequel to DEAD MEN and the second book in his horror epic fantasy series, Libros de Inferno. It’s the first of two essays we expect to see from him about the book and it may well be the more effective of the two, given that it’s an emotionally charged, achingly honest piece about one of the hardest things we deal with in life and how it has directly affected him as both a person and a writer. Please enjoy and keep your eyes focused on this space for the second in this series from John C. Foster.

When Shane mentioned the idea of writing a piece about NIGHT ROADS and how it came together, I thought, “Great!” It’s the sort of essay I wanted to read when I was a new writer and still enjoy reading now that I have a few books under my belt. But life has a way of intruding on everything, including writing.

And there’s nothing more intrusive in life than death.

That was my world when NIGHT ROADS finally hit the street. I decided I wanted to talk about this part of the writing journey first. I want to talk about it because every writer has ups and downs and seeing how I reacted to a kick in the gut might help another writer figure out how to navigate through their own patch of white water.

Right around the time NIGHT ROADS was released into the wild, my partner’s father fell ill, then her mother fell ill…then her father died. This was our lead-in to the 2017 holiday season and it took the wind out of my sails. I needed to be reaching out and promoting the book, doing readings and interviews and writing guest blog posts, but I’m an introvert at the best of times so I decided to hunker down through the holidays and work on promoting the book in the New Year.

Then my mother was diagnosed with a terminal illness in early January and after a few months, she died.

Life will kick your ass, my friends.

Fortunately (or unfortunately) I’ve been through something like this before. Shortly after I finished THE ISLE (you’ll hear more about that one soon) and when I was supposed to be looking for an agent, my father died and I just couldn’t do the outreach. Instead, I dove straight into another novel and wrote with a speed and ferocity I doubt I’ll ever equal. That novel was MISTER WHITE.

Fast-forward a few years and the same situation was happening. I couldn’t get out of my shell enough for appearances and interaction so I turned to another project in need of revisions. But revision is a technical process and it wasn’t the right medicine for the situation. It wasn’t raw enough to provide a haven during those rough months.

So I didn’t promote NIGHT ROADS and I set aside revising the other book and started an entirely new novel on the spot with almost no preparation. A thriller about a woman on the run from a mysterious agency…THE SLAUGHTER THEORY.

It was a project I could pick up and put down. I worked on it at home, in hotel rooms or wherever else I was staying during that tumultuous period. Because so much of my life was consumed with tension and worry, I was able to write without all the insecurities that normally harry a project as it struggles from infant idea to a full grown book. I simply had no capacity to be worried about what I was writing. I’m not much for corny metaphors, but it was the goddamned flower growing from a crack in the cement. Bizarre and wonderful amidst the awful.

The rough, bloody, headlong process of creation was the drug I needed. I wasn’t even sure if I’d finish it and didn’t care. All I cared about was making each character decision honestly. Because I was feeling a lot of pain and because that pain was mine I decided to use it. The woman developed a darker past. Became an ex-convict. It grew darker still, the prison turned out to have been a brutal, gladiatorial environment and as my woman-with-a-past fled from her pursuers with her stepson under her arm, the layers of civilization were stripped away and that gladiator school graduate became a teeth bared, dangerous thing that I hope will captivate readers.

Someone out there right now is having their ass kicked and if they’re reading this, that someone is likely a writer. That writer likely has a personality with different quirks than mine. May find the process of writing a new project downright impossible during a period of stress. Maybe the drug they need is to set aside their work in progress and do a blog tour or attend a convention or beta read someone else’s work or hunt for an agent or read a book they haven’t yet read (because reading is always a part of writing). We’re writers. We write. But there are many aspects to the process and it’s entirely valid to put aside the part that isn’t working during a particular moment and set yourself to a different task. The other project will be waiting on the other side of the rapids, because writing is a long game.

Funny thing is, THE SLAUGHTER THEORY might be a pretty good yarn, just like MISTER WHITE. The rough draft is nearly finished and now that the dust has settled in my life, I’ve returned to revising the other book so my beta readers can give it a read. When I’m done with that revision, I’ll return to dividing my writing day into two parts, finishing up the rough draft of SLAUGHTER and promoting NIGHT ROADS, which is a fine book about a witchy youngster by the name of Hoodoo Girl and the man in the black car who is on her trail.

Writing is a long game, it’s up to us to figure out how to keep our cards on the table.

John C. Foster’s novel Dead Men was published by Perpetual Motion Machine Publishing in 2015 and his novel Mister White was published by Grey Matter Press in April of 2016. His debut collection of short stories, Baby Powder and Other Terrifying Substances and Night Roads, sequel novel to Dead Men, were published by Perpetual Motion Machine Publishing in 2017. His stories have appeared in numerous magazines and anthologies including Shock Totem, Dark Moon Digest and Dread – the Best of Grey Matter Press among others. He lives in Brooklyn with the actress Linda Jones and their dog Coraline. For more information, please visit www.johnfosterfiction.com.